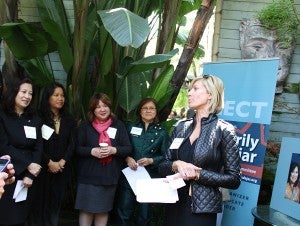 Janet Reilly, honored in 2012 by the League of Women Voters as ‘A Woman Who Could Be President,’ introduces Marily Mondejar during the launching of her candidacy. Beside Mondejar (next to Reilly) is Hydra Mendoza, followed by Mary Jung and Alice Lee, wife of San Francisco Mayor Ed Lee. Photo by EMChavez

SAN FRANCISCO—Surrounded by stalwart friends and supporters, Marily Mondejar, president and founding executive director of Filipina Women’s Network (FWN), recipient of the 2010 Award for Excellence in Civil Rights from the California Asian Pacific Islander Joint Legislative Caucus, formally threw her hat in the ring for a run at a seat in the Democratic County Central Committee, otherwise known as the “DCCC” or “D triple C, San Francisco.”

A graduate of Emerge California, an organization that recruits Democratic women to run for political office, Mondejar has found her calling and realizes the importance of bringing a woman’s perspective to discussions on matters affecting her constituents. She also wants to bring her “bi-cultural voice and immigrant perspective to the important decisions being made at the DCCC especially in the support, election and appointment of commissioners and judges.”

According to the 2010 Census, there are 36,437 Filipinos in San Francisco. They are also the second highest Asian voting population in the city and yet, since the DCCC’s inception, there have only been two Filipinos elected to the committee and that was in the past. Currently, no Filipino is on the committee.

“Marily is not afraid to raise issues that will cross the line when it benefits the disadvantaged. Marily leads by doing, not just talking.” Said Gloria Agcaoili, former Senior Political Director of the Asian Pacific American Labor Alliance, AFL-CIO, during a 2009 Expo Magazine interview. Now, three years later, Mondejar continues her advocacy to get women, disenfranchised or not, to push for change. Fighting to dispel the preconceived notions of Filipinas as mail order brides or low-paid help or nannies, she has placed herself in the forefront as the emerging profile of the smart, educated, and highly successful Filipina.

Mondejar also champions other underserved communities such as immigrants, and the LGBT communities. For her continued advocacy on women’s rights, Mondejar was recognized as one of only four Local Heroes/Heroines by highly respected public television network KQED to mark the 2012 Women’s History Month.

For the June 5 elections, 30 candidates are vying for 14 slots for the East side / District 17 under Assemblyman Tom Ammiano. Mondejar represents the new and emerging Asian American Democrats. She hopes that Filipinos in District 17 will go out and vote for her. It will be a big task. Turn out has been historically low even as the district covers a huge swath of the City. District 17 covers the south end of San Francisco, the Downtown area, Chinatown, The Castro, The Mission, and all the way to Treasure Island to the east.

Mondejar is not new to public service. Last year, she was appointed by Mayor Edwin Lee to the San Francisco Redistricting Task Force. The outcome from this task force will greatly influence the voting make-up of each district and impact the future of its residents for the next decade.