US neutral in Scarborough standoff but will help upgrade Philippine Navy 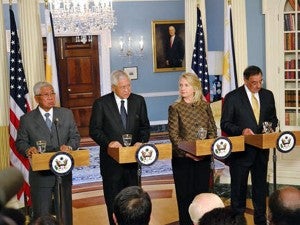 WASHINGTON—The United States says it will help build the Philippines’ sea patrol capability but will not take sides in that nation’s standoff with China at a disputed shoal in the South China Sea.

The top diplomats and defense officials of the treaty allies held their first joint meeting on Monday and discussed the three-week standoff at Scarborough Shoal in the region which Manila calls West Philippine Sea.

Secretary of State Hillary Rodham Clinton reaffirmed US commitment to its mutual defense treaty with the Philippines, and to freedom of navigation and regional security. She reiterated support for a diplomatic resolution to territorial disputes.

A joint statement said they would cooperate on building the Philippines’ maritime security capabilities. The United States will transfer a second ship to the poorly equipped Philippine Navy this year.

Clinton later told reporters that the meeting of the two countries’ four key national security officials was “a testament to our shared commitment to write a new chapter” in their partnership.

She voiced concern about Scarborough Shoal, repeating that Washington does not take sides on competing sovereignty claims there but has a national interest in maintaining freedom of navigation as well as peace and stability.

“The United States supports a collaborative diplomatic process by all those involved for resolving the various disputes that they encounter,” she said. “We oppose the threat or use of force by any party to advance its claims.”

Del Rosario lamented how the international news media has accurately described the poor state of the Philippine armed forces.

“It sounds terribly painful for the Philippines, but more painful is the fact that this is true, and we only have ourselves to blame for it,” Del Rosario said candidly as Clinton and US Defense Secretary Leon Panetta listened across a table.

“For the Philippines to be minimally relied upon as a US regional partner … it therefore behooves us to resort to all possible means to build at the very least a most minimal credible defense posture,” Del Rosario said.

“Developing a minimum credible defense posture may however be hastened mainly through an enhancement of the activities we do together with our singular treaty and through a positive consideration of increased assistance that we seek at this time as well,” he said.

The two nations, which completed extensive war games earlier this month, are bound by a mutual defense treaty in which the United States has pledged to come to the aid of its weaker ally if it faces military aggression.

“We are concurrently seeking a higher level of assistance from other international partners,” Del Rosario added.

Gazmin alluded to tension with China over islands in the South China Sea as he called for the need to “intensify our mutual trust to uphold maritime security and the freedom of navigation.”

“We should be able to work together to build the Philippines minimum credible defense posture, especially in upholding maritime security,” Gazmin said.

The Philippines and China have been embroiled in a dispute at Scarborough Shoal, with both nations stationing vessels there for nearly three weeks to assert their sovereignty.

The Philippines says the area, which it calls Panatag Shoal, is its territory because it falls well within its 270-kilometer exclusive economic zone, as recognized by international law.

The Philippines has called for arbitration through the United Nations to end the dispute, but China has refused.

In a press conference after the talks, the Philippine officials stressed diplomacy when asked what aid they had sought from Washington to bolster Manila’s ability to patrol its waters and deter what they call intrusions.

“The assistance we have sought is to help us bring the case to international legal bodies so that the approach is the legal rules-based approach in resolving the issue in the South China Sea,” Gazmin said.

In Manila, Peter Galvez, spokesperson of the Department of National Defense, said US affirmation of its treaty commitments with the Philippines was one of the significant results of the Washington talks.

“The outcome of the discussion was very positive. We have cleared the question, which is what we want to stress, that our alliance will really be effective, that they will honor the Mutual Defense Treaty (MDT),” Galvez told reporters in a phone interview Tuesday.

The department took no issue with the US stance not to take sides in the standoff.

“We do not want to reach the point where we will seek (assistance under) the MDT,” Galvez said.

“What we just want to stress the commitment of the US government on our MDT,” Galvez added. With reports from AFP, AP and Dona Z. Pazzibugan in Manila