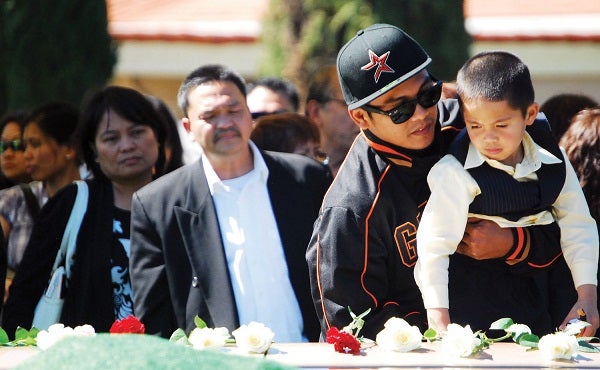 HAYWARD, Bay Area, California—As more than a hundred friends and relatives gathered round the Ping family to bury their beloved Katleen, Christian “Ian” Rafanan Vicuña watched over son Kayzzer, mindlessly roaming the burial site at this city’s Chapel of the Chimes.

The sun was ablaze Friday afternoon, April 20, prompting Ian to occasionally coax the four-year-old to stay with him in the tree shade, from where he watched mourners queue up to scribble love and farewell notes on the underside of the grave cover.  The occasional cool breeze, indeed, failed to punctuate even for a moment the outpouring of love and warmth that accompanied Katleen to her grave.

Katleen Ping was the lone Filipina among the seven who were fatally shot, execution-style, April 2 at Oikos University in Oakland by a disgruntled former student, One Goh.

On that tragic Monday morning, Katleen woke up early enough to chat yet again with husband Ian in the Philippines over Skype.  Thanks to technology, the couple had shrunk the physical distance between them; the internet had kept their marriage alive and strong.

Monday’s chat in a way was more than just routine, for the couple spoke about preparations for Katleen’s citizenship exams scheduled for April 19, as well as about the main scenario they had always awaited.  Beyond the nervousness and apprehension as the testing date drew near, Katleen and Ian were excited.

“We discussed the possibility that I might be able to come here as early as October this year, and we would have started living together as a family and building a future,” Ian said in Filipino to FilAm Star.  “She was doing everything possible to take care of all requirements for me to follow them here, and we were certain she would hurdle the citizenship exam without sweat.”

The couple envisioned spending beautiful times together here in the States, and they filled their internet chats with details of how they would find time to see the world.

“We planned on visiting a country or two every year.  She always talked about her love to travel,” Ian told FilAm Star.  “But above all, we vowed to ensure that Kayzzer gets a good education.”

Katleen and Ian went to the same school in Manila’s Far Eastern University (FEU), where she was studying to be a nurse and he was taking up Architecture.

“I was immediately smitten when I first saw her,” Ian recalled.  “The moment I first saw her, I felt something deep inside.  Call it love at first sight, but that’s how it went.  From then on, we were always together for the next four years.”

Katleen’s nursing studies at FEU though were cut short as she, while pregnant with Kayzzer, had to leave with her mother, Mary Jean, and her siblings to join their dad, Liberty, in the U.S.  At one point, Katleen returned to the Philippines to marry Ian and leave Kayzzer behind with him, so she could resume and fast-track her nursing studies here.

Ian admitted to FilAm Star he did not believe the Cavite pastor who broke the tragic news to him.  He thought it was just another of Katleen’s jokes, some of which were so morbid he simply laughed them off.

To Ian, his wife’s light, jesting disposition only served to put her strong personality in balance, so to speak.

He said:  “It was her very strong personality that first attracted me to her.  She was a go-getter ….. once she put her mind onto something, she made sure she pursued it.  It was that kind of personality that I realized I needed and wanted, and that would have been very good for our family.

Katleen’s good-natured demeanor and ‘doer’ attitude was exactly the same asset that endeared her to the staff and students of Oikos University, where she multitasked as secretary-admin assistant-receptionist.

Jaehoon Moon, dean of Business Affairs, said Oikos was very lucky to have Kathleen around, describing her as “one that employers would always dream of having in their staff as family.”

Moon continued:  “She was always smiling despite her being busy at work.  She was very courteous and approachable.  She also always listened to other people’s concerns and needs.  She was always happy.  Her attitude was infectious ….. on any busy and stressful day for the university staff, her smile always turned things better and easier.”

Such work ethic was not left unrewarded by the university.

“Katleen was given a raise, although she was just relatively new at Oikos,” her father, Liberty, confided to FilAm Star. “At a time when the economy was preventing pay raises everywhere, Oikos gave her one.  She was very happy and grateful.”

It was meant as a reward for performing a role at Oikos University that went beyond fulfilling routine tasks.

“We will miss the nice, very lovable person who brightened our day …. everyday at Oikos,” Moon said of Katleen.

Read Next
3 Fil-Ams to run for seats in California legislature
EDITORS' PICK
Latest patient brings number of COVID-19 cases in Cebu to 29
Anne Curtis, Angel Locsin, and Gabbi Garcia: Celebrity tweets on the state of the nation
Senators on Duterte ‘shoot’ warning: ‘Let’s address hunger’ instead
Vico Sotto replies to NBI, asks for clarification
DOLE Bicol shells out P45.7M in aid for 9,000 displaced workers
Macalintal: NBI on ‘fishing expedition’ as no ‘genuine’ case vs Vico
MOST READ
Angelica Panganiban on endorsing Duterte in 2016: ‘Patawarin niyo ko’
PACC to NBI: Probe Robredo for ‘competing with national govt’ in fight vs COVID-19
PACC’s COVID-19 motto? ‘Lahat ng tutulong, ikukulong’ — Lacson
5 Filipinos on Forbes Asia’s “30 Under 30” roster
Don't miss out on the latest news and information.