Peachy Pelaez-Reyes helped make the Filipino fiesta a US tradition 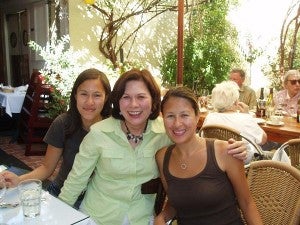 In the San Francisco Bay Area, groups are no doubt gearing up for big community parties. For the Pinoy fiesta has become one of the enduring Filipino traditions in the region, especially in such cities as Vallejo, Union City and, of course, San Francisco.

And we have Peachy Pelaez-Reyes to thank for making the piyesta popular.

She helped launch the Fiesta Islands Fair, a yearly weekend of fun, food and entertainment in front of San Francisco’s City Hall.

Peachy died last week. She was 65. She was beloved for bringing people, Filipinos and non-Filipinos, together.

“It was Peachy who organized the biggest Philippine Independence Day festival in the United States: the Fiesta Islands Fair was a two-day event held at the Civic Center building,” said businessman and community leader Greg Macabenta.

Other festivals followed, including one in Vallejo, which has one of the oldest Filipino communities in the region.  Another big gathering, called Pistahan, is held every year in San Francisco Yerba Buena center.

The fiestas help bring Filipinos and other communities together. Peachy was also known for facilitating other kinds of connections.

Nancy Harrington, who started the Books for the Barrios program, called Peachy “our first friend in the FilAm community.” Her program has been donating books to schools and other institution in remote rural areas in the Philippines

“We used to drive into the city to use her fax machine before we became a charity,” she recalled. “We developed a world-class school in Medina, near Cagayan de Oro in honor of her family. We will now establish a preschool classroom in her honor. She always endorsed our project and supported it every single year.

“She is a one of a kind humanitarian and she will be sorely missed.”

When Penelope realized that many of the teachers, who were mostly white, were also being assigned to schools with sizeable Filipino populations, she approached Peachy with an idea: to send some of the teachers to the Philippines for training to give them a better sense of Filipino culture.

“Her vast array of skills impressed me much as we planned for the group to teach English, Math and Science at the University of the Philippines Comprehensive School  on Katipunan Avenue, Diliman, QC,  and at the Philippine Normal Laboratory School on Taft Avenue, Manila,” Penelope said. “Peachy made sure they gained the best cultural and educational experience.”

Peachy, she continued, was “so tickled pink with delight: like a ‘peach’ when the SFSU teacher candidates revealed that their Filipino students addressed them ‘sir’ and ‘madame’ and actually did their homework without complaints. Peachy is so unassuming and very humble.  She will always be remembered.”

She was born Maria Elena Pelaez in September 1946 in Manila. Her mother Edith gave her the nickname Peachy after her favorite cartoon character. Her father was former Vice President Emmanuel Pelaez.  She spent summer vacations in Cagayan De Oro and the vice presidential summer house in Baguio.

As a young woman, she set out to see the world. She traveled with her sister Apples around the world. Eventually, she settled in San Francisco where she raised a family with her first husband Rene Villanueva. They had four children.

I came to know Peachy when I was a reporter for the San Francisco Chronicle and she was still Philippine tourism director San Francisco, a position she held from 1987 to 1999.

It was an exciting time for the community. Filipinos became the largest Asian community in California based on the 1990 census. In the Bay Area, young FilAms were becoming more politically and culturally engaged.

It was a perfect time to begin new groups and new traditions. One tradition is the yearly fiesta in which people can celebrate the Filipino journey in the United States.

“We owe Peachy for starting it all,” Greg Macabenta said.