Different perceptions of a rising China 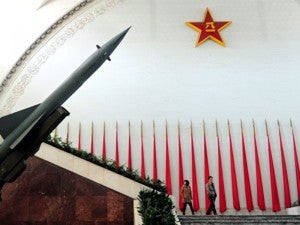 A couple walk beneath a Chinese-made Hongqi-2 missile on display at the Military Museum in Beijing on March 4. China has announced a double-digit increase in its secretive military budget but insisted the annual outlay of more than $90 billion posed no external threat despite concern worldwide. AFP

Of late, Malaysia has emerged as one of the strongest voices to welcome China’s rise, citing repeatedly that this phenomenon should be “a cause of optimism rather than concern.”

It cautioned that China would act the way others threat the country. Singapore and Thailand, which used to echo the same sentiment, have become more circumspect largely due to their domestic developments. They do not speak out loud of the benefits of China’s rise as much as they did two decades ago. Taken together, however, the trio form the core of moderating voices in Asean, sandwiched by other colleagues with varied degrees of comfort levels.

Vietnam, the Philippines, Burma and Indonesia have demonstrated their independent views and appreciation of China differently from Cambodia, Laos and Burma, which have closer relations and cooperation with Beijing.

After establishing diplomatic ties with China, all three have shown a high-level capacity to engage China in balanced ways without upsetting the overall Western strategies with the US dominance. In the early 1980’s, Thailand was the main conduit to generate trust and confidence for China among the Asean colleagues through the Cambodian conflict. Beijing and Washington backed the Khmer Rouge-led anti-Vietnamese resistance forces which pushed out the foreign troops.

The next decade, Singapore singularly spoke on behalf of China on the global stage regarding economic opportunities and strategic imperatives. That role gradually ceded after China gained recognition due to its phenomenal economic growth and subsequent membership in the World Trade Organization. The island’s views on China are pragmatic and reiterate the need to have other major powers, especially the US and India, to balance the rise of China.

Currently, under Prime Minister Najib Tun Razak, Malaysia has reached out to the US and China simultaneously and swiftly repositioned itself as one of the prime movers in the new strategic landscape. Dissimilar to his predecessors, Najib’s enthusiasm to reengage with the US is highly visible and has left a strong impression in Washington these days. So far, he has played his card well between the US and China.

Of late, Vietnam and the Philippines have emerged as the most vocal against China’s rise pertaining to security and power projection in the region. In the past two years, China’s ties with the two countries with substantive claims in South China Sea have deteriorated. The lack of progress has encouraged the internationalization of the disputes which kept under wrap and discussed within the Asean-China framework. Washington’s strong advocacy over the freedom and safety of sea-lane communications at the Asean Regional Forum last July resonated very well with Asean. It was a welcome shift.

The China-Philippines relations are extremely problematic. Popular sentiments could swing Manila’s policy from one pendulum to the other in no time. Manila’s current frustration over its relationship with China, especially their territorial disputes in the South China Sea are highly visible. Latest announcement of joint oil and gas exploration between Hanoi and Manila would serve as a litmus test of Beijing’s tolerance. Inevitably, it will affect the existing equation of China-Asean on ongoing negotiations and hamper discussions over the overlapping claims.

As non-claimants, Cambodia and Laos are close friends of China within Asean. Their capacity to engage and balance China’s influence and regional agenda is not as luxurious as those enjoyed by Thailand, Malaysia and Singapore. As the next Asean chair, Cambodia will have a dedicate task to steer Asean-China relations, not to mention its special ties with Vietnam and since 2000 with China.

Laos took five years before it joined Asean in 1997 – instead of 1995 when Vietnam did – to ensure it would not antagonize its northern neighbor. No doubt, Laos has benefited greatly from China’s generous financial assistance, and  investments in mega-infrastructure projects. Cambodia has enjoyed the same privileges after Prime Minister Hun Sen reconciled with China following its membership in Asean.

The attitude of Burma and Indonesia must be seen through historical lens. Unlike Vietnam which fought wars with China, both countries suffered from China’s past interventions. Their deeply rooted animosity could not simply be ignored when mapping out a long-term engagement strategy, individually or collectively, under Asean frameworks.

Indonesia’s growing image as a democratic Islamic nation is a well earned status. If push comes to shove, Jakarta’s insistence will weigh in and impact on Asean’s overall perception of China and its external relations. It can trump the grouping’s moderate voice.

Prime Minister Najib declared that in the post Cold War, Asean will not have to make a choice when it comes to China. That should be the case if the strategic environment remains as benign as a few years ago. With the enhancement of US role and commitment in Asia, particularly its desire to have a facilitating role in the South China Sea issue and refashioning Asia-Pacific alliances, Asean might find itself in awkward positions where the strategic ambiguities could be unattainable.

The current Asean chair sees a common platform on global issues as a precursor for a stronger and higher profiled Asean. But to do so, Asean needs to overcome the present hurdle with China. That would mean Asean can act jointly. The successful conclusion of guidelines must be the top priority as it could effectively remove the mutual suspicions and enable all conflicting parties to proceed with the implementation of a code of conduct eradicating tensions and uncertainties. Then, South China Sea will be calmer.