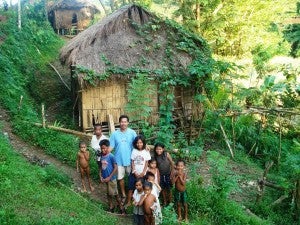 Fr. Edwin Gariguez with children in a Mangyan community on Mindoro island.

For Father Edwin “Edu” Gariguez, the environment of Mindoro  is worth dying for.

Gariguez, better known as Fr. Edu, has long been recognized as the man leading a decade-long campaign, which culminated in an 11-day hunger strike in 2009 to stop a large-scale nickel mining in Mindoro.

On April 16, Gariguez was recognized as one of six recipients for this year’s Goldman Environmental Prize (an award given annually by the Golden Environmental Foundation to ”grassroots environmental heroes from each of the world’s six inhabited continental regions”) for his commitment to saving the environment of the island just off the coast of Luzon and for “leading a grassroots movement against a large-scale nickel mine to protect Mindoro Island’s biodiversity and its indigenous people,” said Goldman officials in a statement.

The five other recipients are from Argentina, China, Kenya, Russia and the US. Each received $150,000 for his/her cause.

Goldman officials hailed them as a “group of fearless emerging leaders working against all odds to protect the environment and their communities.”

Gariguez serves as a pastor at the Mangyan Mission Catholic Church on Mindoro Island. Originally from Quezon Province, Gariguez has lived and worked on Mindoro for decades. He is also the executive secretary of the National Secretariat for Social Action, Justice and Peace of the Philippine Catholic Church.

According to officials, Gariguez was motivated by his religious beliefs and a strong desire to uphold the will of the people to protect their environment.

Gariguez is co-founder of the Alliance Against Mining (ALAMIN), a broad coalition of Mindoro residents, elected officials, civil society groups, church leaders and indigenous peoples who oppose mining on the island.

In a video profile on the Goldman website, Gariguez said he is not opposed to mining but believes measures to safeguard the environment, protect indigenous communities’ rights and ensure a fair distribution of economic benefits should be required.

“We are not absolutely against mining,” he said. “We are trying to craft an alternative mineral management deal that will address the problem of protecting the environment and not sacrificing it for the short term deal.”

Mining in the Philippines has long been a topic of controversy in the country since the passage of the Republican Act (RA) 7942 in 1995, An Act Instituting a New System of Mineral Resources Exploitation, Development, Utilization and Conservation.

The industry brings in billions of dollars into the country and has grown at a 25 percent rate since 2008, according to Seeking Alpha, a stock market news and financial analysis website.

Mining in the Philippines was seen as a way to promote the country’s untapped mineral resources to foreign investors and bring in much needed revenue to decrease poverty and promote local development, said Maita Gomez.

None more so than the Arroyo administration from 2000Ð2010 promoted the benefits of mining and exploration but neglected its environmental costs.

“The Arroyo Administration actively propagated the illusion that it was engaged in promoting ‘sustainable/ responsible mining.’ The mining industry was expected to deliver a slew of benefits, at best without costs to the environment and local communities and at worst, accompanied by adequate measures to compensate for or off set these costs,” Gomez wrote in Transparency Issues in the Philippine Mining Industry.

What Gomez soon found was that “the experience of local communities has been that mining has not brought progress but dispossession and displacement; has threatened livelihoods; infringed on water shed areas, denuded forests and caused environmental vulnerability; has flagrantly disregarded indigenous and human rights.”

“These communities and many local government officials have increasingly expressed their opposition to the presence of large-scale mining in their areas,” Gomez added.

Gariguez saw this firsthand in Mindoro, which is known for its lush forests. Kids swim and drink the island’s fresh water while farmers and fishermen rely on the land and sea for food.

In 2001, Norwegian company Intex began drilling in the island to develop a nickel mine.

“The massive project would produce several million tons of toxic waste and be the size of 1,000 football fields,” according to Goldman.

Gariguez knew he needed to do something to protect the indigenous people of the island because as he said as a member of the church, their role was to give “voice to the voiceless.”

“The danger of the indigenous people is the water source will be polluted and the waters of life for the farmers and the community will be threatened,” said Gariguez.

He teamed up with local leaders and government officials. However, he said the national government kept pushing for the project because of the revenue it would bring in to the country.

In 2002, local lawmakers passed an island-wide moratorium that required Intex to stop any activities related to large-scale mining.

When Intex ignored the local ordinance and continued business as usual, Gariguez took his fight overseas, traveling to Europe to address Norwegian parliamentarians and Intex shareholders. In conjunction with a Norwegian NGO, he filed a complaint with the Organization for Economic Cooperation and Development.

Gariguez continued his fight in the Philippines. He demanded for the national government to uphold its laws and maintain better oversight of the mine project.

His campaign to stop mining in Mindoro culminated in 2009. With a group of protesters and supporters, they staged a hunger strike.

“We camped outside of the Department of Environment and Natural Resources and told them we are not going to eat anything,” said Gariguez. “We are willing to offer our lives and we are willing to die unless they give in to our demands.”

The hunger strike lasted 11 days but it worked.

Goldman officials said the DENR finally agreed to conduct an investigation into the mine’s environmental and social violations and eventually revoked Intex’s permit, halting all mine activities.

ÒAs a result, major funders, including Goldman Sachs, divested of their funding, leading Intex to make an unsuccessful attempt to sell the $2.4 billion project in 2010,Ó said Goldman officials. “Shortly after the botched sale, Intex’s CEO resigned due to ‘severe setbacks.’”

Gariguez was awarded the Prize at an invitation-only ceremony on Monday, April 16, at the San Francisco Opera House, followed by a smaller ceremony at the Smithsonian’s National Museum of Natural History on Wednesday, April 18.

Other recipients include Sofia Gatica of Argentina, Ma Jun of China, Ikal Angelei of Kenya, Evgenia Chirikova of Russia and Caroline Cannon of the US.