Aquino: These are our waters | Global News
Close
menu
search

Aquino: These are our waters 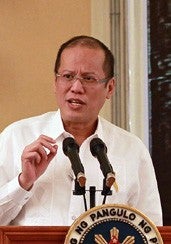 On the 13th day of a standoff  with Chinese vessels off Zambales province, the Bureau of Fisheries and Aquatic Resources (BFAR) sent a craft to join a Philippine Coast Guard search and rescue ship at Panatag Shoal.

“It’s the showing of the flag,” President Benigno Aquino III told reporters on Monday. “We believe these are our waters. Therefore, our vessel has the right to be in our waters.”

But Mr. Aquino stressed that his government was seeking a diplomatic solution to the impasse and that he had appealed to partners in the Association of Southeast Asian Nations to take a stand on the territorial dispute.

“The dispute has to be settled. It can’t be left hanging forever,” the President said.

Lt. Gen. Anthony Alcantara, chief of the Armed Forces of the Philippines Northern Luzon Command, said the BFAR ship hooked up with BRP Pampanga on Monday afternoon in the cluster of reefs and islands known internationally as Scarborough Shoal. China claims the area as part of its territory and calls it Huangyan Island.

Pampanga relieved BRP Edsa, which returned to base on Monday to replenish provisions and refuel.

Alcantara told reporters at Camp Aguinaldo in a phone interview that the fisheries craft would “check on our marine resources there.”

He said the lone Coast Guard vessel was keeping watch as Chinese fishing ships and a gunboat appeared intermittently in that pocket of the West Philippine Sea, known to the rest of the world as the South China Sea.

“We saw two Chinese fishing boats but these were outside the shoal. Our Coast Guard ship saw the CMS 71 but they had no visual contact of the other, the FLEC, 310 (gunboat)… but we assume it’s still there,” he said.

“Everything is normal,” he said, describing the situation as “stable.”

He said the BFAR ship had no intention of boarding the Chinese fishing vessels.

“That’s not their job. Their only job is just to check our fisheries resources and our marine resources,” Alcantara said.

In an interview on ANC television, Foreign Secretary Albert del Rosario said Monday the Coast Guard was staying in the shoal 220 kilometers west of Zambales.

“We will leave when we’re ready to leave, not when we’re told to leave,” Del Rosario said, referring to Beijing’s demand last week that the Philippines withdraw vessels from Panatag.

He warned that the Chinese moves were threatening freedom of navigation in the vital sea lane. “I think the current standoff is a manifestation of a larger threat to many nations,” he said. “They should be concerned if they’re interested in maintaining the freedom of navigation and unimpeded commerce.”

Del Rosario expressed concern over “very incomplete and even misleading information” relayed to Beijing by Chinese Ambassador to Manila Ma Keqing, who had held two rounds of talks with DFA officials over the impasse.

DFA spokesperson Raul Hernandez said Del Rosario referred to a report by Ma that the two panels had agreed to withdraw from Panatag. “There’s no such agreement yet because it’s still being discussed.”

“Also, there’s no agreement yet about the fishing boats that were poaching and which have actually collected a big amount of endangered species,” said Hernandez.

Del Rosario also announced that he planned to recommend the appointment of a career diplomat as ambassador to China after the Commission on Appointments turned down the nomination by Mr. Aquino of businessman Domingo Lee for a third time last week.

The Panatag standoff was not discussed, according to presidential spokesperson Edwin Lacierda, who said the talks centered on the visit by Del Rosario and Gazmin to Washington and their meeting on April 30 with US Secretary of State Hillary Clinton and Defense Secretary Leon Panetta.

Del Rosario sprained an ankle before the Malacañang meeting and failed to attend a press briefing at DFA.

In a radio interview Monday, Gazmin declared that “the Philippines has an absolute and indisputable sovereignty over Panatag island.” He said the standoff ensued because of illegal activities by Chinese fishermen.

“If you’re in the area, I’m sure you will feel the tension because you’re outnumbered and their ships are bigger than your ships,” he said.