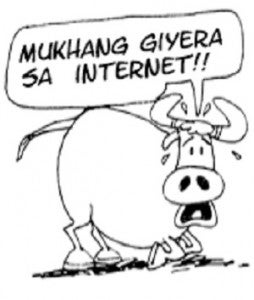 Outnumbered in terms of warships, warplanes and ground troops, the Philippines wants no war with China even in cyberspace.

“It will not bode well for anybody from both sides to increase tension because of the issue,” Valte said in an interview over government radio dzRB. “We call on citizens, including ours, to exercise civil temperance.”

Valte was referring to recent attacks against Philippine and Chinese websites by hackers claiming that Panatag, or Huangyan Island to Chinese, is within their country’s territory. The shoal is located west of Zambales and, Philippine officials say, is well within the Philippine exclusive economic zone.

On Friday, hackers claiming, “We come from China! Huangyan Island is Ours,” defaced the website of the University of the Philippines (UP). The Department of Foreign Affairs (DFA) immediately called for an investigation.

On Saturday, a hacker (or hackers) bearing the name “Anonymous#Occupy Philippines” attacked the China University Media Union website, replacing its homepage content with a digitized image of a Guy Fawkes mask. The hacker said: “Chinese government is clearly retarded. Scarborough Shoal is ours!”

Also attacked was a Chinese government website, where hackers posted a map of the West Philippine Sea and said the Spratly Islands—also a disputed cluster of isles and believed rich in oil and natural gas—belonged to the Philippines.

The UP website, meanwhile, was back online on Saturday.

Valte did not think the cyber attacks would affect efforts by  Manila and Beijing to find a diplomatic solution to the standoff in Panatag.

At present, talks between the two sides were “on and off,” according to Communications Secretary Ricky Carandang.

Malacañang, at the same time, gave China its assurance that the current Philippine military exercises with the United States had nothing to do with the issue of Panatag, saying the exercises had been scheduled for some time. With a report from AFP

Read Next
Scarborough belongs to PH, old maps show
EDITORS' PICK
Eleazar: PNP open to ICC probe but PH judicial process is working
P258M shabu seized, Chinese national arrested in Manila drug bust
Gilas out to prove Korea win not a fluke; Tab fires back at ‘lucky shot’ remark
SANTIS Delicatessen: The road to survival is sweet and savory
Man wounded as raid on illegal cockfight in Isabela leads to shootout
Piolo Pascual: The Ultimate Heartthrob continues to level up
MOST READ
Palace: Face shields no longer needed to be worn outdoors
LOOK: ‘Low vaccination’ turnout in 4 Manila sites after no walk-in policy
Lacson or Pacquiao a possible presidential candidate for NPC – Sotto
‘Pinadudumi ang politika:’ Sotto wants FB to shut down ‘troll farms’ until after 2022 polls
Don't miss out on the latest news and information.