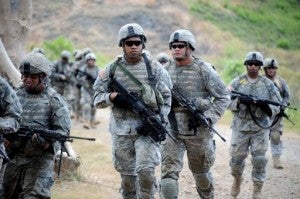 US army soldiers take part in a joint Philippines-US military exercise at the military camp of Fort Magsaysay, Nueva Ecija, on Saturday, April 21, 2012. The Philippine military said Sunday the war exercises, dubbed Balikatan, would continue despite China’s warning on Saturday that the exercise in the disputed West Philippine Sea (or South China Sea) have been raising the risks of an armed confrontation. AFP PHOTO/NOEL CELIS

The Armed Forces of the Philippines on Sunday shrugged off Beijing’s warning that military exercises between Filipino and US forces could lead to a confrontation with China.

On the 12th day of a standoff at Panatag Shoal, Maj. Emmanuel Garcia said China had no reason to feel concerned about the annual Balikatan (shoulder-to-shoulder) exercises that started a week ago.

The AFP’s spokesperson for Balikatan said in a radio interview that the two-week event, which features naval drills and humanitarian activities, was not in any way related to the impasse in an area known internationally as Scarborough Shoal and called Huangyan Island by China, which insists it is part of its territory.

“We maintain that the Panatag Shoal is not connected in any way to Balikatan exercises. The Balikatan has long been planned, and its purpose is interoperability between US and Philippine troops and exchange of ideas,” Garcia said on dzBB.

“It is too far. The Balikatan is being conducted in many places, such as Fort Magsaysay (in Nueva Ecija) … Ternate, Cavite … Palawan,” Garcia said, pointing out that these areas are far from the West Philippine Sea, known to the rest of the world as the South China Sea.

On Saturday, in a commentary in the official Liberation Army Daily, China’s military warned the United States that the Balikatan exercises had raised risks of armed confrontation over the disputed area, in what news reports described as its “toughest high-level warning yet” following weeks of tension.

“Anyone with clear eyes saw long ago that behind these drills is reflected a mentality that will lead the South China Sea issue down a fork in the road towards military confrontation and resolution through armed force,” said the commentary in the Chinese paper, which is the chief mouthpiece of the People’s Liberation Army.

“Through this kind of meddling and intervention, the United States will only stir up the entire South China Sea situation towards increasing chaos and this will inevitably have a massive impact on regional peace and stability.”

The Pentagon said Balikatan was a regular exercise “not tied to any current situation.”

“The focus of this year’s exercise is on disaster response and civic assistance,” said Navy Cmdr. Leslie Hull-Ryde, the Pentagon spokesperson.

Not directed vs China

A Philippine Coast Guard search and rescue vessel, the BRP Edsa, is facing off with two Chinese vessels at the shoal in an impasse that began on April 10 when Beijing’s surveillance ships stopped the Philippine Navy from investigating poaching of marine life by eight Chinese fishing boats, which later slipped away.

Garcia stressed that although both sides would continue Balikatan on “traditional combat maneuvers,” the exercises would largely focus on noncombat aspects, such as humanitarian and disaster response. He said activities in Palawan mostly involved “civic assistance projects.”

“We are not going to stop Balikatan (in spite of China’s warnings). This has long been planned, whether there are issues or not with Panatag Shoal,” he said. “This is not directed toward or against any nation.”

“The different approaches employed by other countries in HADR will surely help us widen our perspective and improve our policies, procedures, preparations and responses in the emergence of natural calamities and man-made disasters in the Philippines,” he said.

Scarborough Shoal lies 120 kilometers off Zambales province, and is well within the Philippines’ 370 km exclusive economic zone, according to the Department of Foreign Affairs (DFA). China claims the shoal, along with the Spratlys. Aside from the Philippines and China, four other countries are claiming the mineral-rich Spratlys.

“It seems they are the ones war-mongering,” said Lt. Gen. Juancho Sabban, AFP Western Command chief, reacting to the Chinese warning. “There is no issue about any effect the Balikatan might have on the West Philippine Sea,” he said in a phone interview with Camp Aguinaldo reporters from his base in Puerto Princesa.

Sabban said Balikatan involved a “purely field training exercise and CMO (civil-military operations), which are not related to the West Philippine Sea or China.”

“So where are their allegations coming from?” he said.

He said the exercises involving some 4,500 American troops and 2,300 Filipino soldiers would push through regardless of China’s warnings. It does not concern China anyway,” Sabban said, adding that there was no point responding to China’s allegation as “it is very far from the truth.”

“Let them be. That’s just mongering,” he added.

Zhang Hua, spokesperson of the Chinese Embassy in Manila, dismissed suggestion that Beijing was escalating tensions at Panatag.

“We have been very restrained until now,” Zhang said in a text message. “We did not aggravate the situation as some said.”

“First, Huangyan Island is part of China’s territory. Second, it is the Philippine Navy that first pointed their guns to our fishermen,” he told the Philippine Daily Inquirer. “We have not sent our Navy (to the shoal) yet, but only civilian ships.”

He confirmed reports that a huge Chinese fishery and maritime law enforcement ship had arrived in the shoal and had linked up with another Chinese vessel. But he said the vessel was “there for fisheries administration.”

Zhang said China’s “door is always open” for what he called “friendly consultations” with the Philippines on the dispute.

Last week, negotiations between the two sides ended in a “stalemate,” according spokespersons of the two sides. With a report from Jerry E. Esplanada