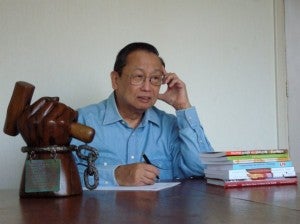 The founder of the Maoist party in the Philippines disapproves of what he calls China’s imperialist and capitalist designs in the West Philippine Sea including the Panatag Shoal, where Chinese poachers triggered a standoff between Philippine and Chinese authorities.

Jose Maria Sison, founder of the Communist Party of the Philippines, said China’s historical claims over what it calls the South China Sea amount to an absurdity, “as this would be like Italy claiming … all areas previously occupied by the Roman Empire.”

“Chinese historical claims since ancient times amount to an absurdity as this would be like Italy claiming as its sovereign possession all areas previously occupied by the Roman Empire,” said Sison, now also the chair of the International League of Peoples’ Struggle.

“The name China Sea was invented by European cartographers and should not lead anyone to think that the entire sea belongs to China. In the same vein, neither does the entire Indian Ocean belong to India,” Sison said.

Sison’s remarks came in response to questions posed by Bayan Secretary General Renato Reyes about the standoff between the Philippines and China at Panatag Shoal, internationally known as Scarborough Shoal.

Bayan, the nominated section of the National Democratic Front of the Philippines (NDFP), shared Sison’s answers with the Inquirer by e-mail.

“The [United Nations Convention on the Laws of the Sea] is the strongest legal basis for the definition of the territorial sea and [exclusive economic zone] of the Philippine archipelago,” Sison said in a rare agreement with the position of the government.

“Also, archaeological evidence shows that the islands, reefs and shoals at issue have been used by inhabitants of what is now the Philippines since prehistoric times,” he added.

President Benigno Aquino III, in his statements on disputed territories in the West Philippine Sea, has repeatedly referred to the Unclos and its provision for a 200-nautical-mile exclusive zone in explaining the legitimacy of the country’s claims in the disputed waters.

“As a matter of principle, the Filipino people must assert their national sovereignty and Philippine territorial integrity over the issue of the Spratlys [Kalayaan] and other islands, reefs and shoals [that] are well within the 200-nautical mile [exclusive economic zone] defined by the [Unclos],” Sison said.

“According to the Philippine reactionary government, it submitted on time to the UN the necessary scientific and technical grounds to define the Philippine 200-mile EEZ under Unclos,” Sison noted.

He said there was archaeological proof that “the islands, reefs and shoals at issue have been used by inhabitants of what is now the Philippines since prehistoric times.”

“But the Philippine reactionary government muddles the issue and undermines its own position by making historical claims that date back only to a few decades ago when pseudo-admiral [Tomas] Cloma made formal claims to the Kalayaan group of islands,” Sison said, reverting to his usual criticism of the government.

Asked by Reyes how the Filipino people should react to the incursions of China in territories claimed by the Philippines, Sison said the government “should desist from self-fulfilling its claim of China’s aggression by engaging in an anti-China scare campaign.”

“The Filipino people and progressive forces must oppose what may be deemed as incursions and what may appear as aggressive behavior of China with regard to the territories belonging to the Philippines,” Sison said.

Sison said the Filipino people and “progressive forces must consciously differentiate their position from that of the Aquino regime, its military subalterns and its Akbayan special agents who pretend to be superpatriots against China but are in fact servile to the interests of US imperialism.”

He said the Aquino administration and its allies are using the anti-China campaign “to justify the escalation of US military intervention in the Philippines and US hegemony in the Asia-Pacific region.”

“At any rate, China must not violate Philippine national sovereignty and territorial integrity, the UN Convention on the Law of the Sea and the Code of Conduct it agreed to with the Asean,” Sison said.

“The apparently aggressive or assertive acts and words of China are in consonance with its own premise of national sovereignty and territorial integrity as well as with the bourgeois character of the Chinese state that may indicate an imperialist tendency or ambitions,” he added.

Sison doubted that the United States and China would go to war against each other.

The United States is a treaty ally of the Philippines, with such military accords as the Mutual Defense Treaty and the Visiting Forces Agreement.

“There is unity and struggle between two capitalist powers in the relationship between the US and China,” Sison said.