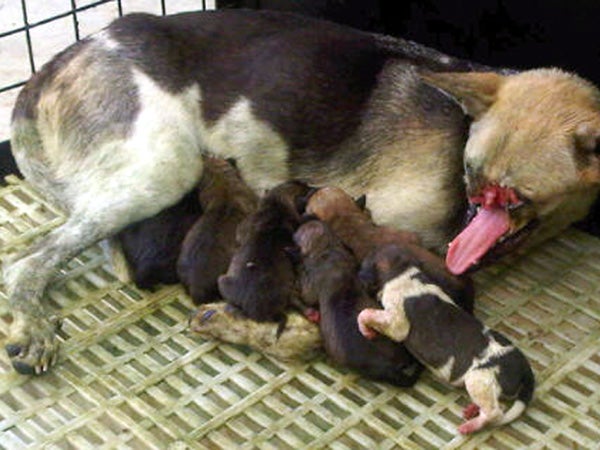 ZAMBOANGA CITY, Philippines—Animal welfare groups and individuals touched by the dog Kabang’s act of saving two girl’s from harm in December are moving heaven and earth to help at least one of her masters accompany the pet to the United States for reconstructive surgery to restore the dog’s lost upper jaw.

The problem is that neither Rudy Bunggal nor his wife, Christina, has documents needed to obtain a passport or other travel documents.

Dr. Anton Lim of the Tzu Chi Foundation here said they were trying their best to help the couple.

The main problem so far, Lim said, is that none of the Bunggals has a birth certificate.

Lim said it was important for Kabang to have either Rudy or his wife during the surgery in California as it would hasten the dog’s recovery.

Kabang is so attached to her masters that one of them, at the least, should be with her, he said.

But it seems bureaucratic red tape was getting in the way.

Lim said Rudy had gone to the National Statistics Office here for a copy of his birth certificate but there was none, so he was  advised to “go back to the place where he was officially registered by his parents.”

The Bunggals originally came from Bogo in Cebu but migrated to Payao in Zamboanga Sibugay when Rudy was 9 years old.

Rudy told the Inquirer that his father had died and he heard that his mother was  in a home for the elderly.

“My mother is also a ‘kolorum’ (no birth documents),” he said.

Ramona Consunji of the Animal Welfare Coalition said they were appealing to the NSO to give special  consideration to Rudy’s case.

“It’s very important for Nong Rudy to be with Kabang before, during and after surgery, I can see their connection. Kabang strongly responds to him,” Lim said.

Consunji said they were hoping that the assistance offered by Vice President Jejomar Binay could fast-track the issuance of a birth certificate to either Rudy or Christina.