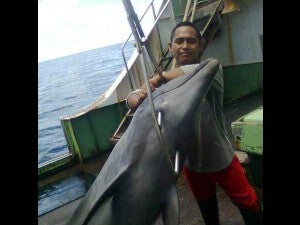 ‘Sailor 16’ poses for a photograph while holding a hooked dolphin, which he said was accidentally caught from South Africa. Photo from his Facebook account

MANILA, Philippines—A man who had posted a photo of himself on Facebook with a hooked dolphin was now being hunted by a non-government organization.

“The man is said to be working aboard a long-line tuna boat” that uses ” metal hooks to catch its target species, which is yellowfin tuna,” Earth Island Institute (EII) Philippines said in a statement released Friday.

The man who was identified by EEI as “Sailor 16” said on a televised interview that the dolphin was accidentally caught somewhere in South Africa.

“We urge the general public to help us obtain more information with regard to the name of the boat Sailor 16 works in so we can send an alert out to track this boat, and its tuna delivery,” EEI said.

It said that sharks are more usually caught by tuna fishing boats but not dolphins which “never bite metal hooks as they sense this through their sonar”.

“The dolphin shown in the photograph was probably caught intentionally,” EEI said. “It is also doubtful if the incident happened in South Africa as the government does not issue fishing licenses to foreign boats.”

EEI has an agreement with over 400 tuna companies worldwide that they will not buy “tuna that is caught by chasing, harassing, or killing dolphins,” it said.

It also has its International Monitoring Program (IMP) initiated in the 1990s which has been “the largest private-sector led monitoring program that aims to track the tuna from its source to the end buyers, ensuring that the tuna were not caught in association with dolphins,” EEI said.