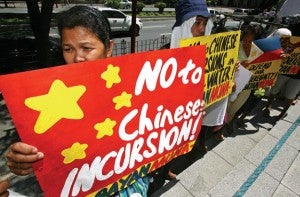 IT’S OURS, YOU HEAR? Members of Bayan Muna stage a rally in front of China’s consulate office in Makati City on Thursday, demanding the withdrawal of Chinese vessels from Panatag Shoal in the West Philippine Sea. RAFFY LERMA

China has dispatched a powerful military vessel in the South China Sea after rejecting a Philippine proposal to submit the Panatag Shoal dispute, now on its 10th day, to international arbitration, Chinese media reported Thursday.

The English-language China Daily based in Beijing said  China’s most advanced fishing patrol vessel, the Yuzheng 310, had been sent to protect Chinese fishermen in the region, which Manila calls the West Philippine Sea.

The newspaper, regarded as a guide to official Chinese policy, said that Beijing’s latest moves underscored its “determination to protect its maritime interests in response to Manila’s refusal to withdraw ships from Chinese waters.”

Yuzheng 310, described as the fastest fishery administration vessel, left Guangzhou on the Pearl River just outside Hong Kong Wednesday morning for an undisclosed place in the South China Sea, it said.

The newspaper said that earlier on Sunday, Yuzheng 44061 left Zhanjiang port in Guangdong province to patrol waters around the Spratlys (which Beijing calls the Nansha Islands), which are being claimed in whole or in part by the Philippines and China and four other countries.

The official Xinhua News Agency said 10 boats were still fishing in the general area of Panatag, according to a Voice of America report.

“The move also sends the message to Manila that Beijing does not make concessions after China has shown patience and sincerity to avert the situation from deteriorating,” the daily quoted an analyst at the China Foundation for International and Strategic Studies.

The Armed Forces of the Philippines on Thursday announced that the government-commissioned archaeological vessel MY Sarangani and a fishing boat had left Panatag, which the Chinese calls Huangyan Island and which is internationally known as Scarborough Shoal.

Only a Philippine Coast Guard search and rescue vessel, BRP Edsa, remains in the area about 220 kilometers west of Zambales and well within the 370 km exclusive economic zone of the Philippines, according to Lieutenant General Anthony Alcantara, AFP Northern Luzon commander.

Alcantara said the BRP Edsa had reported sighting three vessels at Panatag but could not determine if they were Chinese. He said the Coast Guard could not even check the flags of the vessels.

“They are not Filipino vessels,” Alcantara said in a phone interview with reporters in Manila. He said the Coast Guard had also spotted two outrigger boats in the lagoon in the middle of a cluster of reefs and islands. He said he had no information on when the fishing boats arrived there.

The sightings of the foreign fishing vessels on Wednesday coincided with the departure of the Sarangani and the Filipino fishing boat.

Alcantara said the two Filipino vessels left because their work was done and not because of intimidation. “As far as I know there was no threat to them. They were protected by our Coast Guard,” he said.

He said the BRP Edsa would “continue its mission, to take care of our interest in Scarborough Shoal and then to protect our fishermen, Filipino nationals if need be.”

The Coast Guard later relieved the Gregorio del Pilar to enforce maritime laws, according to military and defense officials, while a diplomatic solution was being pursued.

On April 14, a Chinese vessel ordered the Sarangani to withdraw and on April 16 a Chinese aircraft buzzed a fishing boat in Panatag in the second such incident in four days, prompting the Department of Foreign Affairs to file a diplomatic protest.

Foreign Secretary Albert del Rosario, who is in New York on a previously arranged UN-connected mission, has proposed taking the Panatag issue to the International Tribunal on the Law of the Sea, but Beijing has rejected this, insisting on bilateral discussions.

Zhang Hua, spokesperson of the Chinese embassy in Manila, on Thursday urged the Philippines to settle the dispute “through friendly consultations so as not to complicate or aggravate the incident.”

Philippine officials have vowed to remain at Panatag, claiming the area as part of the country.

A limit to bullying

House Assistant Majority Leader Sherwin Tugna on Thursday urged the Aquino administration to lodge an immediate complaint in the tribunal based in Hamburg, Germany, without waiting for Beijing.

“China’s thumbing down of our proposal should not mean its end. We have the right to pursue it in the proper legal forum,” he said.

“There’s a limit in allowing ourselves to be bullied. It’s called self-respect,” said Sotto.

“It’s not for them to make demands. The Philippines is correct in simply ignoring it instead of saber-rattling and fanning the flames of conflict any further,” said Escudero.

In a statement, the leftist Bagong Alyansang Makabayan assailed Chinese incursions. “As a matter of principle, the Filipino people must assert Philippine sovereignty against any move to undermine it,” said the group’s secretary general, Renato Reyes Jr.

Mayor Desiree Edora of Masinloc, Zambales province, said fishermen had been avoiding Panatag, which Spanish colonizers called Bajo de Masinloc, and which she said was part of her municipality.

“It is mostly our fishermen who go there to fish,” she said in a radio interview Thursday. “They have not been there for quite some time because they are afraid that a confrontation might erupt. They don’t go there anymore,” Edora said. With reports from Dona Z. Pazzibugan, Jerry E. Esplanada, Cynthia D. Balana and Michael Lim Ubac; China Daily and Voice of America