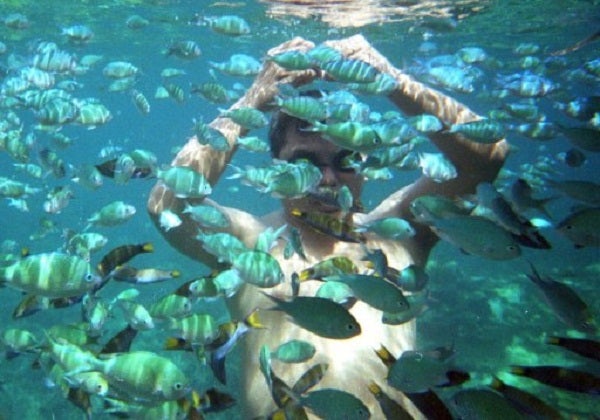 A diver hand-feeds fish in the crystal-clear waters off Boracay in this 2005 file photo. AFP

TOKYO—The global tourism industry, hit by natural disasters and economic turmoil, is eyeing potential travelers from emerging nations in hope that their growing middle and upper classes could spur growth.

Delegates converged on disaster-struck Japan this week for the sector’s major annual conference and were in an upbeat mood, encouraged by the prospect of the so-called BRICS nations: Brazil, Russia, India, China and South Africa.

“Our industry will grow despite all the crises of the last years,” Michael Frenzel, head of German tourism giant TUI, said at the World Travel and Tourism Council summit in Tokyo, which wraps up Thursday.

The summit began in the city of Sendai, one of the areas hit by last year’s quake-tsunami disaster. Many visitors were scared away from traveling to Japan after the natural disasters and subsequent nuclear crisis.

While the tourism sector still grew 4.4 percent last year with about one billion international trips recorded by the World Tourism Organization, the industry has faced a series of obstacles in recent years.

The global economic turmoil, the recent Arab Spring democracy protests shaking much of the Middle East, and the Icelandic volcano eruption in 2010 have all taken a toll on the travel sector.

To counter softening demand among tourists from North America and Europe, southern China’s beach hotspot Hainan is turning its focus to domestic tourism.

“(So) we put a counter-measure in place by developing domestic tourism… In China the growth is still steady.”

“The good news is we still have growth in the BRICS and N-11,” he said, referring to the Next Eleven group comprising Bangladesh, Egypt, Indonesia, Iran, Mexico, Nigeria, Pakistan, Philippines, Turkey, South Korea and Vietnam.

The travel industry was worth a whopping $6.3 billion last year, about 9.0 percent of world gross domestic product, and accounted for almost one job in 12 globally, according to industry figures.

Despite the economic turmoil in hard-hit Europe, the continent itself remains a key destination for many travelers, said Frits van Paasschen, president and chief executive of Starwood Hotels & Resorts Worldwide.

“Europe has tremendous destinations,” he said.

“The Chinese are traveling more and more to Europe, so it is a great time to invest in hotels in Europe.”

Frenzel at TUI Tourism also cautioned against counting Europe out of the travel picture, even if fewer Europeans are venturing beyond the continent.

“Europe has such a density of culture, historical places, nature,” he said.

“This is interesting for hundreds of millions of new costumers from the emerging markets.”

Read Next
Philippine archaeological ship leaves troubled West Philippine Sea
EDITORS' PICK
Omicron variant detected in more countries as scientists race to find answers
Gov’t plans to open COVID-19 vaccination for 5- to 11-yr-olds by January 2022
A delightful blessing!
Villar Group gears up for AllValue Shopping Party on Dec. 3; around P 1-million promos and discounts up for grabs
Legarda: Ending Violence Against Women, a cause for all
Gov’t eyeing COVID-19 vaccine booster for essential workers, indigents by Dec. 10
MOST READ
Quiboloy warns of ‘much worse than Omicron virus’ if his ‘persecution’ is not stopped
Suspected Omicron cases mild, says leading S. Africa doctor
Bongbong Marcos’ conviction in tax case not a crime involving moral turpitude — lawyer
Marcoleta defends pol ads on ABS-CBN
Don't miss out on the latest news and information.