Robert Swift, counsel of the victims who filed a class suit against Marcos in the United States, where the ousted dictator fled and eventually died, said the checks amounted to P43,200 each for 85 claimants.

“That 85 percent of the claimant

s who appeared on short notice is testament to how meaningful the compensation is to them and their families,” Swift said at a press briefing Friday.

“Under the difficult circumstances presented, an 85 percent success rate is a home run.”

Rod Domingo, another lawyer, said 1,000 human rights victims have yet to receive their checks.

He said they would notify the intended beneficiaries in the second phase of distribution starting Monday. 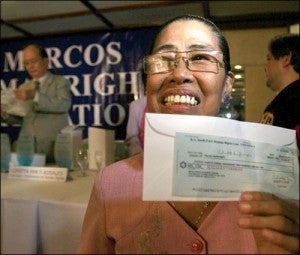 MARCOS CRIMES. A victim of human rights under the regime of former dictator Ferdinand Marcos receives her $1,000 check in this file photo of the ceremonial distribution of the initial compensation that was held at the Club Filipino in San Juan. INQUIRER