Canine heroine ‘Kabang’ to be flown to US 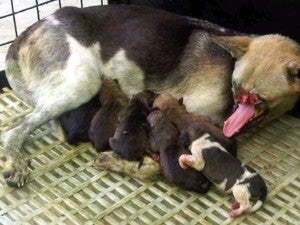 ZAMBOANGA CITY, Philippines— The courageous canine who saved two girls from harm when she blocked the path of a speeding motorcycle here in December, is US-bound.

“Kabang,” a female aspin (short for asong Pinoy or native breed), will undergo major surgery to reconstruct her upper snout, which was mangled and ripped off in the accident, according to veterinarian Dr. Anton Lim.

“Kabang is going to the US with the help of many kind-hearted individuals and donors, who would like to see the dog … live longer. Her story inspired many people especially animal lovers,” Lim said, citing a confirmation from Ramona Consunji of the Animal Welfare Coalition.

Lim said among those helping in Kabang’s trip to the US, which could take place next month at the latest, aside from local veterinarians and humanitarian groups and individuals, was Animal Welfare Coalition US coordinator Karen Kenngott.

Kenngott, who was touched by Kabang”s story, is moving heaven and earth to find a facility, experts and funds to help Kabang, according to Lim.

In an e-mail to the Inquirer, Kenngott said that they wanted Kabang flown to the US as soon as possible.

“The more time that goes by, the more Kabang is at risk of infection,” Kengott said. “Fungal infections can be especially difficult to eradicate and any infection in the bone can be a lengthy process to treat at best. Her chances are better the sooner she can get those wounds closed,” she said.

Lim agreed by saying that Kabang is losing one of her remaining upper molars–which is very important for chewing and grabbing food–because of a previous infection.

Kenngott said Kabang would be operated on at the Veterinary Medical Teaching Hospital of the University of California in Davis, “under a team of multi-disciplinary doctors and surgeons led by Dr. Boaz Arzi.”

Arzi is a maxillofacial and dental surgeon.

While veterinarians here had raised money so that Rudy Bunggal, Kabang’s master, could accompany the dog to the US, Lim said there had been some problems.

For one, Bunggal and his wife Christina have no birth certificates, which they need to secure a passport.

So even if Kenngott sponsored their visas, they might not be able to go to the US after all, Lim said.

Despite that problem, all’s set for Kabang’s trip, Lim said.

“So far, the Team Kabang estimated the overall cost for her treatment to reach $20,000. Kabang is expected to be in the US for a month,” he said.

Maria Carmen Aquino Sarmiento, executive director of the Philippine Airlines Foundation, said they had sponsored four roundtrip tickets for the Bunggals and the two accompanying veterinarians.

“The Philippine Airlines through the PAL Foundation will help Kabang, the heroine dog of Zamboanga City to get to UC Davis so she can get her face fixed,” Aquino-Sarmiento said in a statement.

If Rudy or Christina cannot accompany Kabang to the US, Lim said Kabang would still be comfortable because he and another veterinarian would be traveling with her.

Kabang, which means “spotty” in the local dialect, had recently given birth to six puppies at the City Pound Center here and has become familiar with Lim and Dr. Grace Jimenea of the city veterinary office.

Read Next
Maria Elena Pelaez-Reyes; 65
EDITORS' PICK
IATF: Food firms to operate with 50% of workforce during Luzon quarantine
BREAKING: 1,075 people in PH has coronavirus disease – DOH
Style and music journeys with Claudia Barretto
UP-PGH wards for COVID-19 patients finished in 5 days
Cebu City closes its borders
DILG to stranded workers: ‘Stay where you are’ until Luzon-wide quarantine is over
MOST READ
593 health volunteers sign up to fight COVID-19, says DOH
Pacquiao to seek probe on leaked private letter from Barangay Dasmariñas
Toyota Makati, Inc. employee tests positive for COVID-19
Another doctor dies due to COVID-19 in Cebu City, doctor-husband critical
Don't miss out on the latest news and information.