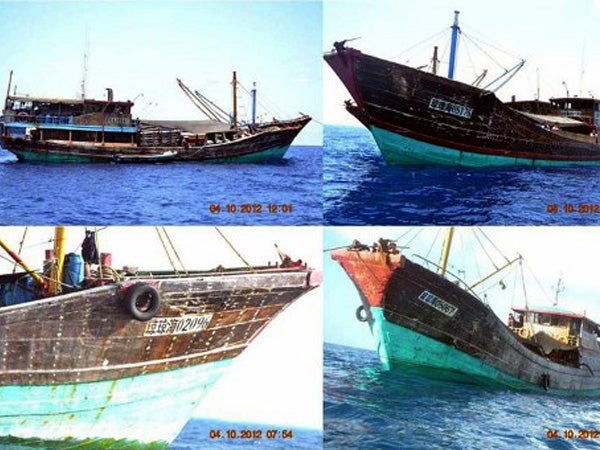 BEIJING—China on Wednesday summoned a top Philippine diplomat and expressed concern over the “harassment” of Chinese fishing boats in disputed waters in the West Philippine Sea (South China Sea), as a maritime stand-off rumbled on.

The two countries have traded barbs for more than a week over a territorial dispute that centers on a disputed shoal not far from the Philippines’ main island of Luzon, and has increased tensions in the region.

On Wednesday, Chinese foreign ministry spokesman Liu Weimin said Vice Foreign Minister Fu Ying had summoned the charge d’affaires of the Philippine embassy on Sunday and Wednesday to lodge representations over the row.

The dispute centers on a group of islands known in the Philippines as Scarborough Shoal and called Huangyan island in Chinese and claimed by both countries.

Beijing, however, claims the warship harassed the fishing boats, and has urged the archaeological research vessel to “leave the area immediately”.

“We hope the Philippine side will honor its commitments and withdraw its ships in relevant waters immediately so that the waters off Huangyan island can return to peace and stability.”

The incidents are some of the most high-profile flare-ups in recent years between the two countries over their competing territorial claims to parts of the West Philippine Sea, which is believed to sit atop vast oil and gas deposits.

China insists it has sovereign rights to all of the West Philippine Sea, even waters close to the coast of other countries and hundreds of kilometers from its own landmass.