MANILA, Philippines—A Catholic priest who led a group of tribal and community leaders in 2009 in an 11-day hunger strike to protest large-scale mining in Mindoro is among the six recipients of the 2012 Goldman Environmental Prize, the foundation announced.

Fr. Edwin Gariguez received the award for “leading a grassroots movement against a large-scale nickel mine to protect Mindoro Island’s biodiversity and its indigenous people,” the US-based Goldman awards, the world’s largest prize program for grassroots environmental activists, said in a statement.

Gariguez and five other awardees from Argentina, China, Kenya, Russia and the US were described by the foundation as “a group of fearless emerging leaders working against all odds to protect the environment and their communities.”

Gariguez served as head of the Mangyan Mission in Mindoro before he was appointed in 2010 as executive secretary of the National Secretariat for Social Action Justice and Peace, the social action arm of the Catholic Bishops’ Conference of the Philippines.

In Mindoro, he actively campaigned against the operations of the Norwegian Intex Resources, whose nickel mining project covers 11,216.6 hectares in the towns of Victoria, Pola and Socorro in Oriental Mindoro and Sablayan in Occidental Mindoro.

In November 2009, Gariguez led a group of 25 Mangyan and community leaders from Oriental and Occidental Mindoro who launched a hunger strike in front of the Department of Environment and Natural Resources to demand for the cancellation of the nickel mining project. The 11-day protest fast ended after the DENR indefinitely suspended the project’s environmental compliance certificate.

“Protecting the rights of the poor should take precedence over corporate greed,” said Gariguez in his acceptance speech. “Genuine development must prioritize the need to ensure ecological sustainability over market profitability. We must never sacrifice people and the environment for short-term benefit of the few.” 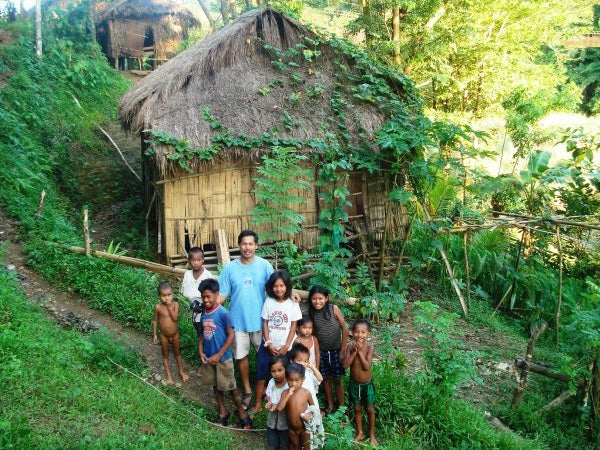 Fr. Edwin Gariguez with children in a Mangyan community on Mindoro island.

The Goldman Environmental Prize, now in its 23rd year, is awarded annually to grassroots environmental heroes from each of the world’s six inhabited continental regions and is the largest award for grassroots activism with an individual cash prize of $150,000, the foundation said.

The winners will be awarded the Prize at an invitation-only ceremony on April 16 at 5 p.m. at the San Francisco Opera House. A smaller ceremony at the Smithsonian’s National Museum of Natural History in Washington, D.C. will follow on Wednesday, April 18.

This year’s other winners are:

Risking her life, Ikal Angelei is fighting the construction of the massive Gibe 3 Dam that would block access to water for indigenous communities around Lake Turkana.

Ma Jun is working with corporations to clean up their practices with an online database and digital map that shows Chinese citizens which factories are violating environmental regulations in their country.

Caroline Cannon is bringing the voice and perspective of her Inupiat community in Point Hope to the battle to keep Arctic waters safe from offshore oil and gas drilling.

A mother whose infant died as a result of pesticide poisoning, Sofía Gatica is organizing local women to stop indiscriminate spraying of toxic agrochemicals in neighboring soy fields.

The Goldman Environmental Prize was established in 1989 by late San Francisco civic leaders and philanthropists Richard and Rhoda Goldman. Prize winners are selected by an international jury from confidential nominations submitted by a worldwide network of environmental organizations and individuals.