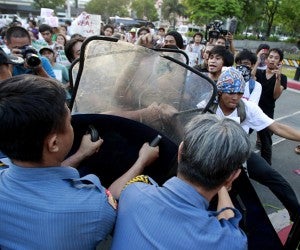 A handful of riot police try to push back protesters who defaced the seal of the U.S. Embassy in Manila, Philippines during a rally early Monday April 16, 2012 to coincide with the opening of the annual joint military exercise dubbed "Balikatan 2012" or Shoulder-to-Shoulder between U.S. and Philippine troops. The protesters are also calling for the abrogation of the Visiting Forces Agreement which allows the U.S. troops' presence in the country. (AP Photo/Bullit Marquez)

Activists protesting Balikatan, the annual Philippine-US military exercises, on Monday hurled paint-filled balloons at the American seal of the US Embassy in Manila and removed some of the letters of its signage using crowbars.

In Floridablanca, Pampanga province, other activists also picketed Basa Air Base of the Philippine Air Force (PAF) as part of a nationwide protest by Bagong Alyansang Makabayan (Bayan) against the joint exercises.

Elsewhere in Pampanga, at least 700 Bayan members gathered at the Nepo Mall grounds and Barangay Marisol in Angeles City and at Barangay Dau in Mabalacat town for a march to  Clark Freeport, formerly Clark Air Base, one of Balikatan’s sites.

They were blocked by Clark security personnel and antiriot policemen at the free port’s main gate, which was protected by barricades made of barbed wire. Only two lanes were open to motorists.

The early morning attack took Manila Police District (MPD) personnel by surprise. By the time antiriot policemen responded, what was left of the signage read: “.m.as.. of the .ni.ed S.ates of .merica.”

The vandalism led to the relief of the Luneta Police Community Precinct (PCP) commander and a policeman caught sleeping inside a patrol car while the protesters staged their lightning siege.

Apart from the administrative relief of the police official and the sleeping policeman, the MPD is set to file a charge of malicious mischief against the protesters responsible for the vandalism.

Some 50 members of  League of Filipino Students (LFS),  Anakbayan, Anakpawis and National Union of Students of the Philippines staged a rally at the embassy on Roxas Boulevard in Ermita before 6 a.m.

Seeing no sign of policemen in the area, the groups started hurling red and blue paint-filled balloons at the US Embassy emblem after which a number of LFS members used a crow bar to peel off several of the bronze-embossed letters from the signage.

Other protesters sprayed “US Troops Out Now” across the main gate and scrawled other anti-American presence sentiments across the walls while embassy security guards helplessly watched the acts of vandalism. The groups likewise burned an American flag.

By the time personnel of the MPD Ermita Police Station arrived, they were outnumbered by the protesters who continued to remove letters from the signage unhampered before voluntarily dispersing.

It was learned that while the groups were defacing the signage, a patrol car (mobile 374) was parked across the US Embassy with its lone occupant deep in slumber.

The protesters had been long gone before the policeman woke up and drove away, apparently unaware of what had happened during his watch.

Senior Superintendent Robert Po, the MPD deputy director for operations, told the Philippine Daily Inquirer that the district had relieved Chief Inspector Luis Guisic, the Luneta PCP commander. Guisic is set to be administratively charged with negligence for command responsibility over his men’s failure to respond immediately to the protest.

“I have also summoned the policeman who was caught sleeping on the job and asked him to explain,” Po said, adding that the policeman will also face an  administrative charge.

Po said the MPD was studying security-camera footage to identify those responsible. “Those identified will be charged with malicious mischief. Even their leaders, who are identified, will be included in the criminal charge,” he told the Inquirer.

Security was beefed up at the US Embassy to prevent the recurrence of the protest.

In Floridablanca town, Bayan leaders said there were some 400 protesters but the local police placed the number at less than 200.

About 50 PAF personnel blocked the base’s main gate when the activists arrived at 11:20 a.m. A fire truck was seen near the gate.

The protesters painted anti-Balikatan slogans, such as “US troops out now,” “No to Balikatan,” and “Junk VFA (Visiting Forces Agreement),” on the concrete fence of the base in San Jose village.

The PAF did not disperse the protesters who held a brief program condemning the military exercises.

“The Balikatan is but part of a bigger design to make US troops permanent fixtures in the Philippines, even without any formal basing treaty,” Bayan secretary general Renato Reyes Jr. said in a statement.

“We duly respect their freedom of expression and we congratulate them for the peaceful rallies,” said Lieutenant General Anthony Alcantara, Norther Luzon Command  chief.

Reports from the 7th Infantry Division information office said the American soldiers, led by US Army Colonel Jack Pritchard, will demonstrate the use of modern weapons while Filipino soldiers will teach them jungle survival during the exercises.