Memorial held for Fil-Am in US school shooting 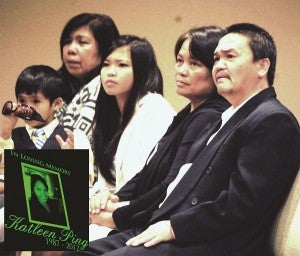 NEWARK, Bay Area, California—A memorial service was held Tuesday for Katleen Ping, the 24-year-old receptionist who was among seven people slain last week at Oakland’s Oikos University in a shooting rampage by former student One Goh.

The solemn gathering of Katleen’s family, friends, and relatives took place in this city’s Bay Area Baptist Church, even as her remains still await release to her nearest next of kin, her husband Christian ‘Ian’ Rafanan Vicuna, who, according to Katleen’s brother, Kaine, is waiting for proper documentation to be able to travel from the Philippines to the US.

The uneasy feeling that Katleen’s body would remain under lock and key for some time hovers over the Ping household in Oakland.  But at the same time, the family said it has been getting help from both the US and Philippine agencies in expediting the travel papers of Ian.

Katleen, had been determined to fulfill her dream of starting a new life with her family in the US. Becoming an American citizen was first on her agenda so she could bring Ian to America to be with her and their son Kayzzer Bryant.

This had been her quest ever since her father immigrated in 1994, when she was attending grade school.

A consistent oratorical contest gold medalist, Katleen had a happy life in the Philippines and had a good educational foundation studying in private schools in Pangil, Lumban, Siniloan and Pakil — all in Laguna — from kinder to high school.

“She was my trusted partner in raising our family particularly in taking care of her siblings — her brother, Kaine, together with younger sisters Kendell and Kizzy —  when their Papa (Liberty Ping) left us,” mother Mary Jean related.

When they had to transfer to Tanza, Cavite to be closer to Manila where she studied nursing at the Far Eastern University (FEU), Katleen helped the family in the preparation and distribution of pork barbecue in the Export Processing Zone Authority

She studied nursing at FEU for only two years and, while pregnant with Kaysser, left for the United States in 2007 with the other members of the Ping family to immigrate.

She had to send son Kayzzer Bryant to the Philippines when he was about three months old so he would know his father Ian and his family In Pangil Laguna.  That way, she can also attend to her own studies.

Katleen then started to take prerequisite courses to continue her nursing degree requirements in the US and in between, she went back to the Philippines to finally marry Ian.

Upon her return to the US with Kayzzer, she had to put her studies on hold to concentrate on a job and also work on papers to petition her husband who was also a graduate of architecture at FEU.

The Ping family’s dreams were starting to unfold as Katleen and Kaine would have their own jobs while the younger sisters study.

Then last week’s tragedy struck. They learned that there was gun shooting at work place of Katleen at Oikos University.

Her immediate superior called the Ping’s land phone to let them know of the incident. Only then would they know Katleen tried to leave voice messages that turned out to be inaudible.

They then rushed to the scene where they confirmed from a family friend also working at the school with Katleen and from the policemen themselves that she was one of those shot then later died in the hospital.

Mary Jean worries about four-year-old Kayzzer as he often misses his mom especially at night and when he sees his mom’s car at the garage. Like any other child his age, Kayzzer would be a playful and cheerful during the day but would suddenly stop to remember his mom occasionally when reminded of things they did together.

“Once, his uncle Kaine offered to help buttoning his shirt. Kayzzer politely turned the offer down saying his mom already taught him how to do it alone. Then tears began to fall on his way to his room. He went to his room so we won’t see him cry for he believes only girls cry,” narrated Mary Jean.

A pastor for the youth broke the news to Kaysser two days after the shooting incident as no one else knew how to best do it. The pastor told the family it would be better that Kayzzer mourns and grieves together with them, rather than Kayzzer doing later by himself.  Liberty always says Katleen she did not have to suffer such violent death.

“I will miss the way she was a loving sister to her siblings treating them out during payday and pampering them sweetly,” Liberty said. “The lessons I learned from what happened to her are that life is too short so live it well, and that one should never be afraid of death.”

But in extending their family’s deepest gratitude to all who expressed their love and support to the Ping family during the memorial, Kaine said:  “I lost my sister who I considered as my best friend. She prayed for an interview for her American citizenship to come. But, with what happened, the Lord promoted her. Instead of giving her American citizenship, God made her heaven bound.”