Philippines, China fail to end impasse over who to leave shoal first

MANILA, Philippines – Efforts to end the standoff between the Philippine and Chinese vessels in a disputed shoal in the West Philippine Sea (South China Sea) failed after both countries demanded that the other one be the first to leave, Foreign Affairs Secretary Albert del Rosario said Saturday.

Del Rosario said he met with Chinese Ambassador Ma Keqing Friday night in a bid to “reach an understanding” on the Scarborough Shoal impasse, which began Tuesday when Chinese ships prevented the Philippine Navy from arresting Chinese fishermen allegedly caught poaching at the shoal, 230 kilometers or 140 miles west of the country’s main island of Luzon.

“The meeting with Ambassador Ma last night resulted in a stalemate as we had demanded of one another that the other nation’s ship be first to leave the area,” Del Rosario said in a statement.

All the fishing boats had left the Scarborough Shoal, leaving in the area a coast guard ship of the Philippines and a fisheries law enforcement ship of China.

“Ambassador Ma Keqing and I had been trying to reach an understanding on the Chinese fishing vessels along the path of our providing a gesture of goodwill in the spirit of the Years of Friendly Exchanges launched in Beijing last April 11 and previously in Manila on March 20,” Del Rosario said.

He said that during his talks with Ma, they failed to reach an agreement on who would have the authority over the corals, sharks and other marine species gathered by the Chinese fishermen.

“I had stated that we would be willing to allow the Chinese boats to return to China following the confiscation of their harvest of endangered species by our authorities,” said Del Rosario. “There was no clear agreement as Ambassador Ma had asserted that Chinese fishing vessels would be subject to inspection by their own authorities.” 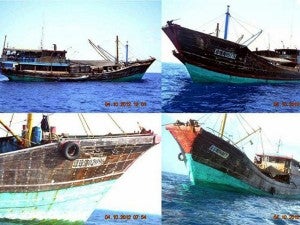 The Chinese fishing vessels after being intercepted by Philippine naval ships which led to a tense standoff with two Chinese maritime surveillance ships off Scarborough Shoal. AFP/DFA/ Philippine Navy

“We had later learned that the Chinese fishing vessels had left the lagoon, a development which we had been working towards except for our not being able to confiscate their illegal harvest pursuant to the Fisheries Code, which was regrettable,” he said.

But one of the two surveillance ships of China also left the area, Del Rosario said.

“Somewhat later, the second white Chinese civilian ship had decided to leave the area so that only one white Chinese ship remained,” he said.

The impasse has reignited concerns about potential conflict in the West Philippine Sea, one of the world’s busiest sea lanes and home to a myriad of competing territorial claims, most notably the Spratly Islands, which are south of the shoal.

The disputes have settled into an uneasy standoff since the last major clash, which involved China and Vietnam and killed more than 70 Vietnamese sailors in 1988. With a report from Associated Press