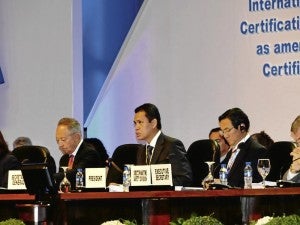 Diplomat Neil Frank Ferrer (center) is the first Filipino to make a bid to become secretary-general of the International Maritime Organization.

The Philippines, the biggest supplier of seamen in the world, is making its first bid for the secretary-generalship of the International Maritime Organization (IMO).

The IMO is the United Nations specialized agency with responsibility for the safety and security of shipping and the prevention of marine pollution by ships.

Diplomat Neil Frank Ferrer, 42, the Filipino candidate, has been the Philippine representative to the IMO over the past 12 years and has served as chair of the powerful Maritime Safety Committee (MSC). He knows the ins and outs of the organization and has grown with the times under the IMO.

The next IMO chief will need to keep an eye on the safety and security of maritime transport in the face of increased piracy.  Environmental issues are also high on the agenda. Promoting the rights and welfare of seafarers is also the IMO’s work.

Ferrer holds a degree in Political Science from the University of the Philippines. After passing the consular exams for young ambassadors and joining the foreign service, he took up his Masters of Science in Economics at the De La Salle University, and later a Master of Arts in International Boundaries (with distinction) from the University of Durham in the United Kingdom.

Ferrer was elected president of the IMO Diplomatic Conference held in Manila in 2010.

A former assistant to the  Marine and Ocean Affairs of the Department of Foreign Affairs, he is also considered one the country’s experts on the United Nations Convention on the Law of the Sea (Unclos).

The IMO leadership is being contested by candidates from other strong seafaring countries like Japan, Cyprus, the United States and others.

The IMO elections will be held this June with run-off elections expected until July or until a clear majority emerges.

Ferrer got an early endorsement from the Associate Marine Officers and Ratings, Inc. (Amor) which counts thousands of seafarers working onboard ships worldwide.

President Benigno Aquino and his diplomatic officers will of course be campaigning for him. The Department of Transportation & Communications  will be sponsoring a dinner in his honor during the IMO convention this month.

It may add to Ferrer’s stature that he enjoys the support of the current IMO secretary-general, Mr. Efthimios Mitropoulos of Greece, mainly because of his outstanding performance and dedicated leadership.

During the Maritime Safety Committee Meeting last May 11-20 in London, Ferrer served as the chair and did well in steering the debates and discussions. When he delivered his final statement, many of the delegates stood up to express their support for him and the committee. The Filipinos in the meeting took their cue and began some impromptu campaigning for Ferrer.

There are almost 300,000 Filipino seamen deployed in almost every port and ship in the world. Its about time a Filipino takes his place at the helm of the IMO.