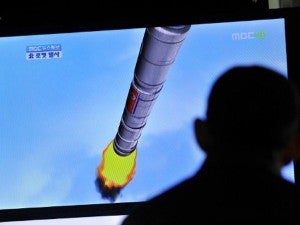 South Korean people watch a TV screen showing a graphic of North Korea's rocket launch at a train station in Seoul on Friday. North Korea launched a long-range rocket that appears to have disintegrated soon after blastoff and fallen into the ocean. AFP

PYONGYANG—North Korea admitted Friday its long-range rocket launch had failed, disintegrating mid-air and plunging into the sea soon after liftoff in a major embarrassment for the reclusive state.

Defying international warnings, the North went ahead with what it said was a launch to put a peaceful satellite into orbit, drawing condemnation from world leaders who said the “provocative” act threatened regional security.

Several hours after the rocket exploded over the Yellow Sea, the North admitted the satellite had failed to enter orbit, adding “scientists, technicians and experts are now looking into the cause of the failure”.

The United States and its allies, who condemned the exercise as a disguised ballistic missile test banned by United Nations resolutions, reacted strongly.

“North Korea is only further isolating itself by engaging in provocative acts, and is wasting its money on weapons and propaganda displays while the North Korean people go hungry,” White House spokesman Jay Carney said.

He said the launch “violates international law and contravenes its own recent commitments”, under which Pyongyang had agreed to suspend its nuclear and missile tests in return for US food aid.

The Philippines condemned the launch, which triggered a “no-sail, no fly” ban since Thursday in areas off the country’s north where debris had been expected to fall, as it urged Pyongyang to “desist from acts of provocation.”

President Benigno Aquino’s spokesperson called on North Korea to be a “better neighbor.”

“We are happy that no harm came out of the failed launch,” Abigail Valte said in a text message to Palace reporters, some of whom were covering Aquino who was in Davao City for a conference on the power situation in Mindanao. “The NDRRMC has lowered the red alert but will continue to be on hand to render assistance if necessary.”

“We remind North Korea that we all share this planet and urge it to be a better neighbor,” she added.

Philippines urges North Korea to be a ‘better neighbor’

South Korea’s defense ministry said the rocket, which lifted off at 7:39 a.m. (6:39 a.m. Manila time), “flew about one or two minutes before it exploded mid-air”.

“We are keeping a close watch over the North for further provocative acts such as missile tests and a nuclear test,” the ministry said, referring to fears the launch could be followed by North Korea’s third atomic test.

The South’s Foreign Minister Kim Sung-Hwan said Friday’s actions were a “clear breach of the UN resolution that prohibits any launch using ballistic missile technology. It is a provocative act threatening peace and security.”

A military spokesman said the South’s navy had launched a salvage operation to retrieve the debris from the rocket, despite warnings from Pyongyang last week not to attempt such an operation.

“Even if it was a failure, it is a grave provocation to our country and other countries concerned and violates UN Security Council resolutions,” he said.

The North’s sole major ally, China, was more muted in its reaction, calling for restraint from all sides, several hours after the failed launch.

“We hope all relevant parties can maintain calm and restraint, and refrain from acts that would harm peace and stability on the peninsula and in the region,” foreign ministry spokesman Liu Weimin said in a statement.

The North American Aerospace Command (NORAD) said that together with the US military’s Northern Command it “detected and tracked a launch of the North Korean Taepodong-2 missile.”

It said initial findings indicated the rocket’s first stage fell into the sea 165 kilometers (around 100 miles) west of the South Korean capital Seoul.

“The remaining stages were assessed to have failed and no debris fell on land,” it said. “At no time were the missile or the resultant debris a threat.”

The Group of Eight powers led criticism of the launch and said they would consider taking “appropriate actions” at the UN Security Council, which will meet later Friday.

The preparations for the launch had triggered regional alarm in recent days.

Tokyo deployed missile defense systems to intercept and destroy the rocket if it looked set to fall on Japan, and flights were diverted to avoid being in the Pacific area where debris from the rocket was expected to fall.

North Korea had insisted the launch would not be a banned missile test and that it had every right to send the satellite up, to mark Sunday’s centenary of the birth of its founding leader Kim Il-Sung.

The 30-meter (100-foot) Unha-3 (Galaxy-3) rocket had been positioned at a newly built space center on the northwestern Yellow Sea coast.

North Korea has invited up to 200 foreign journalists to Pyongyang for the launch and the weekend commemorations, the largest number of overseas media ever welcomed in to the reclusive state.

The nation is in the midst of cementing a power transition between late leader Kim Jong-Il who died last December and his untested son Kim Jong-Un, who is in his late 20s.

“The timing of it is significant. North Korea is all about ceremony and stature and grand, symbolic gestures and they celebrate the 100th anniversary of the birth of Kim Il-Sung.”

The Security Council has ordered an emergency meeting for Friday to condemn North Korea’s actions, but is unlikely to order immediate new sanctions against the isolated state.

Japan and South Korea would like tougher measures against the hardline state, which already faces UN sanctions over its two nuclear tests. But fears the North is preparing a new nuclear test have clouded diplomatic outrage.

“We have to hold our fire. This was bad, but we have to expect worse to come,” said one senior UN envoy, referring to reports of a new underground nuclear test in the making.

The North, which is believed to have enough plutonium for six to eight bombs, tested atomic weapons in October 2006 and May 2009. Both were held one to three months after missile tests.