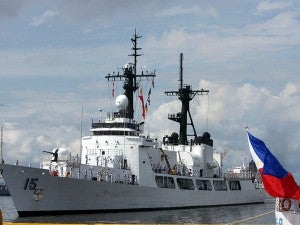 The Philippine Navy’s flagship, BRP Gregorio del Pilar, withdrew from the disputed Scarborough Shoal Thursday morning even as a third Chinese civilian ship entered the area on the third day of a standoff.

“It has been pulled out for reprovisioning. I think it will go to Poro Point, but it has been replaced by a Coast Guard vessel,” Foreign Secretary Albert del Rosario told reporters.

Navy Flag Officer in Command Vice Admiral Alexander Pama confirmed that the BRP Gregorio del Pilar was being pulled out from Panatag Shoal to replenish fuel and food provisions at Poro Point in La Union province.

“It’s definitely not a retreat on the basis of the position that we took that this is ours. There’s another Philippine Coast Guard vessel that will be there to continue to enforce what we started,” Pama said. “That area is ours, there is absolutely no doubt about that. That is ours.”

Del Rosario, who is seeking to defuse tensions over the resource-rich shoal in talks with Chinese Ambassador Ma Keqing, downplayed the arrival of yet another Chinese vessel in the area 220 kilometers west of Zambales province.

“I don’t think it should be a cause for concern. I understand the third ship is attached to the fisheries department of the Chinese government,” he said. “I might ask Ambassador Ma casually why there is another ship there, what’s the purpose of that ship,” he said, stressing that he was “working hard to arrive at a diplomatic resolution.”

“We’re watching developments,” Del Rosario said. “I don’t see any tensions rising. No increase in tension, we’re trying to avoid doing that. Hopefully we could arrive at a resolution as negotiations continue.”

Part of defusing the tension was the withdrawal of the navy’s largest warship, the Gregorio del Pilar, according to Pama. He told the Inquirer the two Chinese vessels are not warships but maritime civilian ships.

Pama also said the Gregorio del Pilar was going to be on standby for any contingency that may arise from the launch any day now of the North Korean rocket.

The standoff began on Sunday when a Philippine Navy plane spotted eight Chinese fishing vessels in a lagoon at Scarborough Shoal. The BRP Gregorio del Pilar was dispatched to the area on Tuesday and attempted to detain Chinese fishing boats found with large amounts of “endangered marine species.” Two Chinese marine surveillance craft intervened, according to the Department of Foreign Affairs (DFA).

Del Rosario said he expected a breakthrough before he leaves for the United States this weekend to campaign for Justice Florentino Feliciano, the Philippine candidate to the International Court of Justice.

“We are moving forward but this is still a work in progress. Hopefully we can get it done in a day or two but we will have to see,” he said.

In a radio interview Thursday, DFA spokesperson Raul Hernandez said the Philippines did not see a need to ask the United States for help in resolving the latest territorial row with China.

“It’s not appropriate at this time to seek help from other countries. We can handle this,” Hernandez said in Filipino.

The United States said it was concerned with the increased tensions in the South China Sea.

“We urge all parties to exercise full restraint and seek a diplomatic resolution,” a State Department spokesperson in Washington said on customary condition of anonymity, according to the Associated Press.

The lack of an official US statement on the tense situation in the South China Sea, which Manila calls the West Philippine Sea, has worried Senator Gregorio Honasan.

“Why is the US ominously silent this time,” Honasan said in a phone interview with the Inquirer. He urged President Benigno Aquino III to “qualify” the terms of military and defense treaties with Washington.

Bayan Muna Representative Neri Colmenares said Malacañang should not blink. “From all indications, the Chinese are hell bent on intruding on our territory to get to our resources,” he said.

Lieutenant General Anthony Alcantara, head of the Armed Forces of the Philippines Northern Luzon Command, said he had relieved the BRP Gregorio del Pilar since the Coast Guard search and rescue vessel, BRP Pampanga, had arrived in the area to enforce maritime laws. He said a second Coast Guard ship was also expected there.

“Our Navy is still there. We will support them. We are not giving up anything,” Alcantara said when reached by phone yesterday afternoon. “We are still asserting our claim, our ownership of the shoal. That’s clear.”

Del Rosario said late Wednesday that he and Ma were working on a possible solution but declined to give details.

“We have an issue here that we’re trying to address in a civilized and friendly way. I’m hopeful that our long-standing friendship will make us arrive at a diplomatic solution faster,” he said.

While they worked toward a compromise, both China and the Philippines also flexed their muscles. Del Rosario said after the first round of talks on Wednesday that he warned China’s ambassador that “if the Philippines is challenged, we are prepared to secure our sovereignty.”

The Chinese Embassy said the fishing boats had taken shelter from a storm in the lagoon and accused Philippine troops of harassment. With reports from Jerome Aning, Michael Lim Ubac and Cynthia D. Balana and AP