Filipino spared from death in Saudi 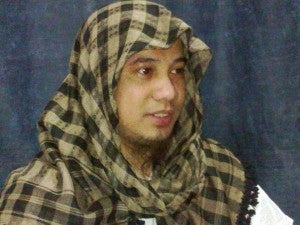 MANILA, Philippines—A doomed Filipino worker who tirelessly campaigned on Facebook for his freedom will soon walk out of Saudi Arabia prison as a free man, a migrant campaign group announced on Thursday.

Rogelio “Dondon” Lanuza, who was on  death row and spent more than 11 years in Dammam Jail for killing a Saudi national who tried to sexually abuse him, will be freed after the aggrieved family accepted the blood money, Migrante-Middle East regional coordinator John Leonard Monterona said.

“At last, my ordeal comes to an end,” Lanuza said in a statement released by Migrante-Middle East.

“I have been in this dire situation for the past few years and the flame of hope was about to be extinguished, yet people from all walks of life have encouraged me to continue my plight, and for that I am truly grateful,” Lanuza said.

Monterona said the “formal blood money acceptance of the aggrieved family” spared Lanuza’s life. His death sentence by beheading was confirmed by Saudi’s highest court in 2001.

A reconciliation team led by former Ambassador Antonio Villamor was successful “in convincing the aggrieved family to formally accept the blood money offered by Lanuza’s party,” the statement said.

The money was raised through the online campaign “Barya Mo, Buhay Ko” on the social networking site Facebook where Lanuza has at least four full fan pages.

“Ma’am Loida Nicolas Lewis has proven to be the final catalyst for my case to lift off to its realization. She, being a model of sincerity a God fearing woman and the epitome of a Filipina for a just cause was the moving hand towards my appeal to influential and common people alike to push my case forward. I am forever indebted to you and pray that your tribe increase,” said Lanuza.

Lanuza said that the influence of social networks helped make his “predicament known to countless countrymen from abroad and [in] the Philippines.”

“I am so blessed and humbled to those faceless men and women who have contributed financially for my cause including the Filipino Community Groups and our unsung Household Workers who did not blink to shell off their hard earned money to help me out,” Lanuza said.

Lanuza also thanked the media “who have followed my case ever so faithfully” to keep the issue in the public sphere.

“Being behind bars has opened my eyes to how much freedom can be so delicate that taking things for granted in the future is no longer an option for me,” Lanuza said.

“I am forever in the debts of such fine and noble people and the Filipino community for helping me realize my dream to finally be with my family and to become fruitful once again to the society,” he said. 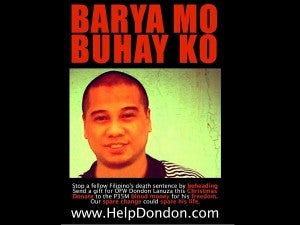 Lanuza argued during the trial he killed the Arab man as an act of self defense. The incident occurred in August 10, 2000, when Lanuza and his friends came back to the house of their Arab host after partying.

“I was defending my dignity,” said Lanuza.

In an unanswered letter of appeal to President Benigno Aquino on October 8, 2010, Lanuza said that he “was charged with and convicted for the killing of a Saudi national, who attempted to sexually abuse his person.”

Migrante-ME called on the Philippine government to also help save other Filipinos on a death row in the Middle East.

“There are about eight OFWs languishing in various jails in the Middle East, six of them were sentenced to death, four are facing possible death sentence upon conviction on various criminal offenses,” Montenora said.