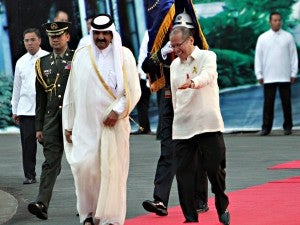 President Benigno S. Aquino III welcomes the Emir of the State of Qatar Sheikh Hamad Bin Khalifa Al-Thani in Malacanan Tuesday. The Emir is on a two day state visit to the Philippines upon the invitation of President Aquino. His highness the Emir’s visit affirms the advancement of political and economic ties between the Philippines and Qatar. INQUIRER PHOTO / GRIG C. MONTEGRANDE

The Philippines and Qatar inked five agreements Tuesday night aimed at increasing investments, trade and economic cooperation with each other.

The signing of the agreements was witnessed by President Benigno Aquino III and Emir of Qatar Sheik Hamad Bin Khalifa Al-Thani, who arrived in Manila Tuesday for a state visit.

Mr. Aquino welcomed the emir of Qatar in Malacañang at 5:35 p.m. Tuesday. After a courtesy call, the two leaders proceeded to have an expanded bilateral meeting with their respective officials.

Presidential spokesperson Edwin Lacierda identified the five agreements—four of which are government-to-government agreements while the other is a private sector agreement.

These included a memorandum of understanding on tourism cooperation which Lacierda said will “create favorable conditions for long-term cooperation in tourism.

Philippine Foreign Secretary Albert del Rosario says the Philippines wants to discuss ways to increase opportunities for Filipino workers. Qatar is host to 175,000 of them. With a report from AP