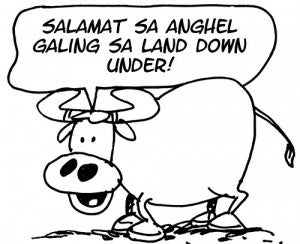 If you don’t believe in angels, you haven’t met Bronte.

It may sound unthinkable that one little girl could spread her wings so wide to set a grand mission in motion—mobilize people from her hometown in Australia to gather relief for the victims of Tropical Storm “Sendong.”

The whirlwind began moving a few months ago. Seven-year-old Bronte Worthy, then visiting the Philippines with her mom and dad, was watching TV news clips of the ravages of the world’s deadliest storm in 2011 that hit the cities of Cagayan de Oro and Iligan when a thought struck her: How could these children survive, having lost their homes, properties—and most especially their toys? Why not give these kids toys they could squeeze or hug like her teddy bear Frank?

Using her cell phone to record a video of her appeal, she began speaking to her classmates in her hometown in Australia: “Please send us your toys and plushies, even old ones that you don’t want any more. The kids here [in the Philippines] need them.” The principal played her video in all the classes and the whole school responded.

It was a simple appeal that didn’t cost a lot—just a few dollars to mail a package. It didn’t utilize the power of big media either—only a two-minute video clip using her cell phone, which was uploaded by her mom Meg on YouTube and was eventually circulated on the Internet. There were no big objectives or nongovernment organizations behind it—only Bronte and her wish for 1,000 plush toys.

Within days, over 3,000 plushies flooded the lobby of Manila Mandarin Hotel. Communications director Charisse Chuidian proposed that the toys be put under the “love tree” the hotel was preparing for Valentine’s Day. By early March, over 5,000 “huggies” of all sizes and shapes were waiting for their new owners.

With the help of courier service LBC which delivered the boxes of toys free of charge to Cagayan and Iligan cities, Bronte’s mission was accomplished.

Still, there were 800 toys left. Capt. Joebert Tolentino of the Philippine Coast Guard suggested that they be sent to the kids of Guihulngan City in Negros Oriental province, where an earthquake had destroyed a territorial enclave and has been getting very little aid.

LBC arranged the shipment of the remaining toys to Dumaguete City and took them overland to Solonggon in Guihulngan, a three-hour drive up the coast. Cebu Pacific provided air transportation for the Solonggon mission while the Armed Forces of the Philippines provided a truck to take some of the passengers to the site. The volunteers were members of the 302nd Brigade and 11th Infantry, the first response team to bring relief to that site in February. The Asian Center for Science and Technology served breakfast while Black Pencil and Hope WorldWide Philippines provided vehicles to transport a team of puppeteers.

In Solonggon, there was stillness in the air. Some tents stood in fields, some near individual houses, even the school had six large tents where students held classes in fear of more aftershocks. Families were still there, under the landslide.

The Hope team staged a short puppet show to teach children’s rights and used the same medium to introduce the Solonggon mission team, especially Bronte. As the toys were set out on a mat in an empty room, the children were invited to come in, seek their favorite color or stuffed animal toy and take one home. Bronte was at the door to greet each one.

How did Bronte get all these people to give so generously? Emergency and relief took on a human face, a little blonde-haired girl who said, “It isn’t right for children to lose their toys and suffer these floods and earthquakes.”

Petite, fragile Bronte is just like any ordinary girl but with a fearless determination embodied in the tiny face of an angel.