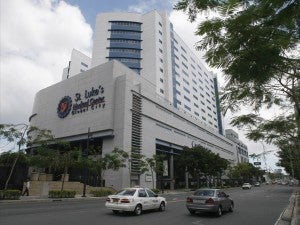 It’s a patient’s nightmare: Confined to a hospital inhabited by people with the worst health conditions one can ever imagine, he becomes witness to a larger metaphor of a malignant disease—the depressing sight and grueling routine in a cold, strained setting.

This is on top of the patient’s infirmity that makes him confront his own mortality.

Despite this, or maybe because of it, local hospital officials have worked on a prescription that would provide progressive medical care in a healthier, happier atmosphere.

Marilen Lagniton, vice president for communication of St. Luke’s Medical Center in Bonifacio Global City, told the Philippine Daily Inquirer that the best compliment she received from a patient on his way out of the hospital was a parting “thank you for making my stay pleasurable and comfortable.”

“It’s not only an honor for the hospital, but for the country as well, and will surely contribute to its tourist arrival,’’ Lagniton said, adding that the grateful patient traveled all the way from Canada to seek medical treatment in the hospital.

SLMC in Global City recently landed on the list of the World’s Most Beautiful Hospitals, a distinction conferred by editors of the US-based magazine Healthcare Management News and Insights in their March issue. The first and only Philippine hospital to be included on the list, it placed No. 11 from among 25 of the world’s best, alongside medical facilities in the United States, Europe, Central America, Middle East and Asia.

Only three hospitals were cited in Asia, the two others located in Bangkok and Hong Kong.

In developing the list, the magazine said interior and exterior features and their health-promoting qualities were considered. “Designs including warm woods and nature-inspired elements, soft color schemes and exterior facades designed with regard to their natural settings placed these facilities on the list.”

The magazine cited SLMC as proof that “health-focused design has no boundaries.’’

“The impressive interior and exterior design, as well as visitor and patient reviews for your hospital contributed to your ranking and we are happy to deliver the good news,’’ Lagniton said, quoting the magazine’s congratulatory e-mail.

The magazine also noted that SLMC “has received international accreditation and is recognized as one of the best hospitals in Asia and the entire world,” which is why it regularly receives patients from around Asia, Micronesia, the Middle East, Europe and the United States.

Lagniton noted that the citation was not solicited.

SLMC stands on a land area of 1.6 hectares with a floor space of 154,000 square meters in Fort Bonifacio, Taguig City.

It is composed of two medium rise towers, the hospital proper having 600 beds and its Medical Arts building housing a 40-unit hotel for caregivers.

Lagniton said that contrary to popular belief, the hospital’s rates are affordable, even as it has various services that address the patient’s and family’s needs.

Lagniton added that a hotel was constructed inside the hospital complex for relatives who want to stay close to the hospital.

A shuttle coaster also travels from the corner of McKinley Road and goes around the Global City for free.

“It’s an added free service to visitors and relatives of patients because we believe that support from your loved ones is a major factor for early recovery and comfort of the patient,’’ Lagniton said.

She said the SLMC leads all medical specialties in the country, which includes, cardiovascular medicine, neurology and neurosurgery, cancer and digestive and liver diseases.

She said the hospital has also acquired the most modern equipment and is also committed to continually improving its services through advanced training of doctors and medical staff.

Read Next
Qatari emir in Manila Tuesday for state visit
EDITORS' PICK
Harnessing technology for quality education
Duterte: When I said I will fight drugs in 6 months, I thought it was like in Davao
Tips for a cheerful life
Hidilyn Diaz wins weightlifting gold in Tokyo Olympics
Duterte warns of possible lockdown if ‘more aggressive’ Delta variant spreads
Connect to PH’s fastest network with new Signature Plan Lite at only P599 per month
MOST READ
Hidilyn Diaz wins weightlifting gold in Tokyo Olympics
Go to war with China over West PH Sea? It will be a ‘massacre’, says Duterte
Hidilyn shoots not only for gold but also for permanent place in PH sports history
Duterte acclaims Sotto: ‘He can become a good vice president’
Don't miss out on the latest news and information.