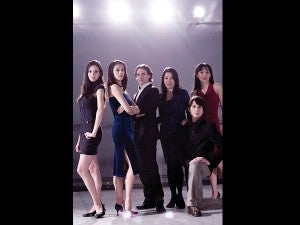 The Cultural Center of the  Philippines recently beamed its spotlights on four Barcelona-based Filipino ballet dancers—Irene Sabas, Aileen Gallinera, Elline Damian, and Eduardo Espejo. The four came with Spain’s Ballet David Campos company which held Manila audiences last month in awe for its unique interpretation of two classics, Sleeping Beauty and Giselle. The Phil-Hispanic dancers came to bring back the fruits of their overseas experience.

Irene Sabas is the cofounder and ballet mistress of the company, which bears the name of her husband, David Campos, a dancer himself and the choreographer of the troupe.

“Coming home is a dream come true for me and the three other dancers who had earlier relocated to Spain to join the company,” said Irene. She and David, a Spaniard, made it happen through the Philippine Spanish Dance Connection, a project that exemplifies what the Commission on Filipinos Overseas wants to achieve under its Diaspora to Development (D2D) Arts and Culture Exchange Program, in partnership with the National Commission on Culture and the Arts.

Irene and David met and fell in love when they were both soloists for the Royal Ballet of Flanders. They eventually left the company together, accepting soloist contracts with a new ballet company in Barcelona, David’s hometown. The company they joined was short-lived but the two dancers decided to stay on and form their own company and school.

It was a struggle in the beginning, recalls Irene. “We were like ballet pioneers in Barcelona as state policy favored avant-garde contemporary art… it was a real struggle to convince government authorities that ballet (classical and neoclassical) was also a necessary part in developing the future and audience interest.”

Philippine-born Irene comes from a musically gifted family and acquired her introduction to dance techniques from dance legend, Felicitas (Tita) Radiac, at St. Theresa’s College in Quezon City. “Irene is intelligent, kind and unassuming. She has a natural grace—not only physical grace but graciousness in character,” said Radaic, who has nothing but praise for her protégé.

With a scholarship from the British Council, Irene went on to train at the Royal Ballet School in London. She returned home to dance with Dance Theatre Philippines and the newly founded Ballet Federation of the Philippines, the union of all classical companies existent at that time in Manila. This paved the way for the creation of the Philippine Ballet Theater where Irene was given leading roles. After two years, however, Irene was off to Europe and joined the Royal Ballet of Flanders in Belgium. David had been asked by the company director to pick up Irene at the train station. The partnership began the moment their eyes met. 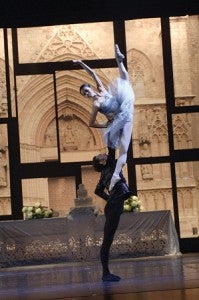 ELLINE Damian in a scene from Don Quixote in Barcelona, Spain. COURTESY OF BALLET DAVID CAMPOS

The artistic pair’s efforts blossomed. “Years of really hard work bore fruit… interesting productions, excellent dancers,” says Irene. A recent gold-medalist in one of the most prestigious dance competitions in the world—the Prix de Lausanne Aleix Martinez—was their student, she proudly reports. “Thankfully, we are now celebrating our 25th year of the school,” beams Irene.

David is proud as well of their Filipino dancers. “The role of Princess Aurora in Sleeping Beauty, I dedicated to Elline for her tremendous beauty, talent and charm,” said the famed choreographer. He expresses great respect for the Filipino dancers who have shown exemplary work ethics. “Giselle is dedicated to Aileen for the same reasons. ”

“These artists are always willing to stretch, to learn, to try new things—without counting the hours,” he adds. “It’s our kaya pa attitude and innovative nature,” was the candid explanations of Elline (nicknamed Lin), who began ballet lessons with Vella Damain, her aunt. Both she and Aileen (fondly called BT), have graced covers of European and Canadian dance magazines.

Eduardo (called Jojo), one of the first three  Filipinos to be granted a coveted Artist’s Visa to Spain, adds: “We love to dance and working with good teachers abroad, especially a highly creative person like David, we see as a privilege, something of great value; an opportunity that can’t be exchanged for money or taken for granted.”

Jojo began dance lessons with Tony Fabella at Philippine Ballet Theater and later toured Russia and the US with Lisa Macuja of Ballet Manila. David, who was once invited as a guest dancer for Ballet Manila, returned the favor by inviting a male Filipino dancer to guest with his own company in Barcelona. That guest dancer was Jojo, who eventually returned to Spain to join Ballet David Campos full-time.

“When you are an artist, you want to explore the world. And Europe with its good choreographers is the capital of dance. So naturally an artist wants to explore this avenue.” Jojo muses, adding that never has he never regretted his decision. The three young dancers are among a handful of Filipino ballet professionals based in Europe.

Irene paved the way for us, shares Lin, who is married to Jojo. When BT arrived, Lin and  Jojo were the ones who helped out. “They adopted me and made it so much easier to deal with homesickness… not knowing Spanish and missing our food,” BT acknowledges.

Both Lin and BT now teach 9- to 12-year-olds just starting en pointe. They say they now understand the nature of their Spanish students, and try to meet them half way while maintaining discipline in class.

Irene herself shares that she learned Spanish while teaching children at the school. It was a struggle to earn the respect of her students, their parents and audiences, she recalls.

Spain itself is not yet a haven for dance artists, according to Irene. There are more dance companies in Germany, England and France.

“But David and I believe though that many people in Cataluña, Barcelona, in particular, and throughout Spain are recognizing the importance and the beauty of our work. We fill up various theatres with our productions, and we have seasons in Barcelona center itself, she added. The Conceller de Cultura of the Generalitat (government) of Cataluña has just sent us via e-mail his appreciation and acknowledgement of the success of our personal project the Philippine-Spanish Dance Connection Project 2012,” reports Irene.

Radaic adds a local rejoinder: “We are a nation of artists. And how wonderful it is to see homegrown artists return and make the nation so proud!”