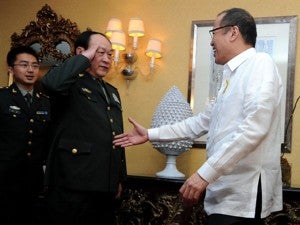 President Benigno Aquino offers a shakehand as Chinese Defense Minister Liang Guanglie salutes during a courtesy call in Malacañang on May 23. AFP

MANILA, Philippines – The Philippines has accused China of “serious violations” in the South China Sea  following at least six aggressive acts in the disputed territory, raising worries Beijing may be fortifying its claims in the potentially oil-rich region.

The Department of Foreign Affairs said it had filed a protest before the Chinese Embassy “over the increasing presence and activities of Chinese vessels including naval assets in the West Philippine Sea (South China Sea).”

China’s actions “hamper the normal and legitimate fishing activities of the Filipino fishermen in the area and undermines the peace and stability of the region,” the DFA said.

The Philippine military has reported that a Chinese surveillance vessel and navy ships were seen unloading building materials and erecting posts in the vicinity of Iroquois Reef and Amy Douglas Bank – an uninhabited undersea hill claimed by the Philippines about 230 kilometers from southwestern Palawan province.

It is part of the Spratlys but well within the Philippines’ 200-mile exclusive economic zone, the DFA said.

The DFA said the diplomatic protest follows a series of protests it filed since March, after two Chinese vessels harassed a Philippine exploration ship at Reed Bank, prompting the Philippine military to send war planes and Coast Guard ships to the area.

Last month, Chinese jet fighters had reportedly intruded into Philippine airspace also  in the vicinity of Reed Bank, part of the Kalayaan group of islands in the Spratlys that the Philippines claims.

“The actions of the Chinese vessels in Philippine waters are serious violations of Philippine sovereignty and maritime jurisdiction and also violate the Asean-China Declaration of Conduct on the South China Sea,” the DFA said.

President Benigno Aquino III on Thursday said that the Philippines was planning to file a protest at the UN for the series of incursions.

“There are six or seven [incursions] happening after February 25. We are completing all the necessary data and then we will present it to them [China] and then file it with the appropriate body, which is the UN,” he said.

Those acts included the reported firing last February by a suspected Chinese naval vessel to scare away Filipino fishermen from Quirino, or the Jackson Atoll, in a Spratlys area claimed by Manila, said officials, who spoke anonymously because of the sensitivity of the subject.

The Chinese Embassy in Manila said the “the reported ‘incursion of Chinese ships’ is not true.” But, it acknowledged the presence there of a Chinese marine research ship “conducting normal maritime research activities in the South China Sea.”

The DFA said both Manila and Beijing agreed to “keep the channels of communication open and continue dialogue on the South China Sea issue.”

With The Associated Press