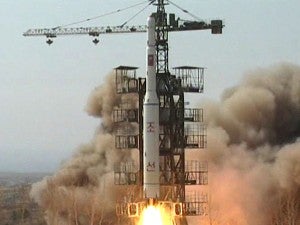 In this April 5, 2009 image made from KRT video, a rocket is lifted off from its launch pad in Musudan-ri, North Korea. As the US and its allies decry North Korea's planned rocket launch, they're also rushing to capitalize on the rare opportunity it presents to assess the secretive nation's ability to strike beyond its shores. AP

MANILA, Philippines—Should one stay indoors for almost a week because of the North Korean rocket launch? Not really, says the Philippine Nuclear Research Institute.

The country’s nuclear research agency clarified Saturday that it was not the source of a recommendation for most Luzon residents to stay indoors from early morning till noon next week because of potential risks posed by North Korea’s rocket launch.

The National Disaster Risk Reduction and Management Council (NDRMMC) had attributed to PNRI a recommendation for people in Regions 1, 2, 3, 4A, 4B, the Cordillera Administrative Region and Metro Manila to avoid going out from 6 a.m. to 12 noon on April 12 to 16.

The advisory was clearly stated in the minutes of an inter-agency meeting NDRRMC led on April 3.  Aviation, marine, military, health, police, weather, civil defense and local government agencies gathered that day to discuss the government’s response to possible threats from the North Korean launch.

“For us, [asking people] to stay indoors has no basis if you talk about the threat of radioactivity because the missile is not radioactive.  But Usec. Ramos (NDRRMC Administrator Benito Ramos) may have some other threats it mind,” PNRI Director Alumanda Dela Rosa told the Inquirer.

“We do not see any threat that would require an action like that,” Dela Rosa said.

She said she had requested Ramos to amend its advisory and remove attribution to PNRI as the public might interpret it as a nuclear or radioactive threat.  The advisory is contained in the minutes posted on NDRRMC’s Web site that anyone can access and download.

“That should not be attributed to PNRI.  But Usec. Ramos explained to me that they are protecting the public from other dangers that could be caused by debris (from the rocket),” Dela Rosa said.

“But I would like to clarify: there is no danger of radioactivity from the debris,” she added.

PNRI is working with other government agencies to implement a response plan in case debris from the North Korean rocket launch indeed falls within Philippine territory. The NDRRMC had estimated that debris might hit waters off Northern Luzon.

A PNRI team will be on standby to do radioactivity measurements on the impact site in case debris indeed falls within the Philippine territory.