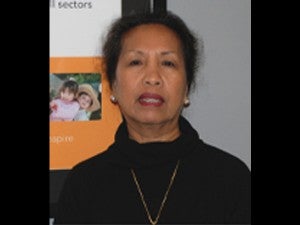 LOS ANGELES—A Filipino-American from Agoo, La Union province, who started a crusade to help the youth when her own daughter got involved in drugs, will be honored Thursday at a White House ceremony as a “Champion of Change.”

Nurse-turned-activist Corazon Basa Cortes Tomalinas of San Jose, California, is one of 12 community leaders who are being recognized for their work to prevent youth violence in their communities as part of the National Forum on Youth Violence Prevention.

In the late 1980s, Tomalinas was among many parents who struggled to raise children in a San Jose neighborhood plagued by drugs and gangs.

“Through this tremendously difficult experience, [Tomalinas] found her life’s calling,”  Valerie Jarrett, senior adviser to President Barack Obama, said at the forum’s national summit in Washington DC, on April 2. “Guided by her faith, she has spent three decades helping to protect young people.”

“Cora understands that while the work starts small, block by block, neighborhood by neighborhood, we have the ability, and the responsibility, to change our country,” Jarrett told an audience that included mayors from across the nation, as well as Attorney General Eric Holder and Education Secretary Arne Duncan.

Jon Carson, director of the White House Office of Public Engagement, said he was proud that Tomalinas and the other “Champion of Change” honorees found innovative ways to prevent youth violence.

“If we’re going to combat violence and keep our kids safe, then we need to ensure we dedicate time and manpower to the issue,” he said. “These leaders have done just that, and this is what makes them true champions for their communities and our country.”

The Champions of Change program was created as part of President Obama’s Winning the Future initiative. Each week, a different sector of champions, ranging from educators to entrepreneurs to community leaders, is recognized for the work its members are doing to serve and strengthen their community.

For the past 30 years, Tomalinas has worked with the San Jose Police Department and other agencies and community groups to combat gang crimes and provide educational opportunities for at-risk youth.

Tomalinas committed to help the youth when her teenage daughter became involved in drugs. Inspired by her faith, she began her activism as leader of the People Acting in Community Together (PACT), an interfaith, grassroots organization that deals with pervasive social problems faced by communities, such as unsafe neighborhoods, failing public schools, and lack of affordable housing and health care.

Born in Agoo, La Union,  Tomalinas received a bachelor of science in nursing from San Francisco State University and practiced as a registered nurse at Kaiser Permanente’s Santa Teresa Hospital before she became a full-time community activist.

She has been married for 30 years to Robert George Tomalinas. They have two children.

Lorna Lardizabal Dietz, a community leader based in Northern California, described Tomalinas as “one of our early advocates in [Filipino-American] community empowerment.”

Launched at the direction of President Obama in 2010, the National Forum on Youth Violence Prevention is a network of communities and federal agencies working together to share information and build local capacity to prevent and reduce youth violence. Tomalinas, along with the forum’s San Jose team, reported on their work’s progress at the April 2 summit.