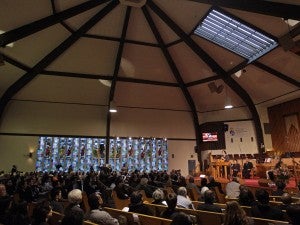 Mourners listen as Oakland Mayor Jean Quan makes a statement during a memorial service at the Allen Temple Baptist Church Tuesday in Oakland, California. Several hundred people gathered Tuesday night for a prayer vigil for the victims of Monday's shooting at Oikos University, a small Christian school in Oakland. AP

OAKLAND, California—One Goh’s life was on the skids even before he became the suspect in the biggest mass school shooting in the US since the 2007 massacre at Virginia Tech.

He was chased by creditors. He grieved the death of his brother. In January, he was expelled from Oikos University, a small Christian school where he was studying nursing. And, police say, he was angry.

Goh, who was born in South Korea, told them he felt disrespected by teasing about his poor English skills at the Oakland school — a college founded as a safe place where Korean immigrants could adjust to a new country and build new careers.

So, he bought a gun and a few weeks later took his revenge, opening fire at the college on Monday in a rampage that left six students and a Filipino receptionist dead and wounded three more, authorities said.

“It’s very, very sad,” police Chief Howard Jordan said. “We have seven people who didn’t deserve to die and three others wounded because someone who couldn’t deal with the pressures of life.”

Police have released little background information about Goh, other than to say he had become a US citizen.

Since Goh’s arrest at a supermarket near the school soon after the shooting, the details of his life that have emerged so far suggest a man struggling to deal with personal and family difficulties over the past 10 years.

Though records list an Oakland address for Goh in 2004, he lived for most of the decade in Virginia. That state was the site of the Virginia Tech massacre that killed 32 people in 2007. That gunman was a mentally ill student who turned the gun on himself.

Goh, now 43, spent a few months in late 2005 in suburban Richmond and three years in Gloucester County along the Chesapeake Bay, where he lived in an aging townhome complex around the corner from a storage facility.

Next-door neighbors recalled him as being very quiet, but said he would speak if they spoke first. Goh kept to himself to the point that neighbor Thomas Lumpkin, 70, never learned Goh’s name.

“He was always well-dressed, nicely shaved, and his hair nicely cut,” he said.

In 2009, Goh was evicted for owing back rent. A message left with the apartment rental office on Tuesday wasn’t immediately returned.

Online records in the two Virginia localities show that, while Goh was there, he racked up tens of thousands in liens and judgments, including a $10,377 debt to SunTrust Bank in 2006.

According to Gloucester County Court records, Capital One sued him for $985.96 on an unpaid credit card bill, plus court costs. The court issued a judgment against him on December 9, 2011.

His brother was an Army sergeant stationed in Germany who died in a March 2011 car crash while attending Special Forces selection training in Virginia, according to the military newspaper Stars and Stripes.

The same year, Goh’s mother died in South Korea, where she had moved, her former Oakland neighbors told the San Francisco Chronicle.

It’s unclear how Goh earned a living before he became a nursing student at the tiny private school of about 100 students. But in January, Goh found himself expelled. Oikos officials have not said publicly what led to his expulsion.

According to the school’s disciplinary policy, dismissal can come if a student threatens or harms someone or school property. “Because Oikos functions as a community of believers, students are to demonstrate a respectful attitude in all encounters,” it states.

Jordan said officials kicked Goh out for unspecified behavioral problems and that he had “anger management” issues.

People at the school “disrespected him, laughed at him,” Jordan said. “They made fun of his lack of English speaking skills. It made him feel isolated compared to the other students.”

Around 10:30 a.m. Monday, after planning the attack for weeks, Goh arrived at the school in an industrial park near Oakland’s airport, police said. Upon entering the building, Goh was intent on finding a female school administrator who wasn’t there, Jordan said.

Goh then accosted Filipino receptionist Katleen Ping, marching her to a classroom, he said.

Goh “started ordering people to stand up, started yelling at them,” the police chief said. “They started freaking out. He asked them to line up. Some did, some didn’t, and that’s when he began to shoot.”

By the time police arrived, five of the victims were already dead. Two died later in the day at the hospital.

Ping, 24, came to the US from the Philippines in 2007 and leaves behind a four-year-old son, said her father, Liberty Ping. He described his daughter as the rock of their family.

“We’re just focusing on the positives,” he said. “She’s with the Lord. She’s in a better place right now.”

So far, investigators said, Goh has not shown any remorse.

Goh appeared to have selected his victims at random and none were his alleged tormentors, Jordan said.

Police said Goh has cooperated with officers — though he would not reveal where he left the semi-automatic pistol used in the shooting — and is being held without bail on suspicion of seven counts of murder, three counts of attempted murder and other charges. He is expected to make his first court appearance Wednesday afternoon.

Mayor Jean Quan joined pastors from the Bay Area’s Korean Christian community in calling for unity and an end to violence.

Romie John Delariman, who teaches in Oikos’ nursing program, said he knew Goh and the victims, and was too distraught to elaborate about what happened. He said he was deeply concerned about his students’ wellbeing.