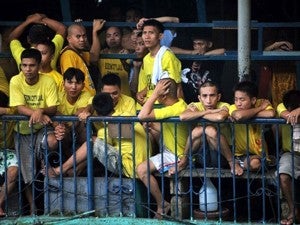 Inmates at the Quezon City Jail wait to vote in village-level elections in this October 2010 file photo. AFP

MANILA, Philippines—The International Committee of the Red Cross on Friday urged the Philippines to ease serious overcrowding in its prisons, where the US government said hundreds had died from tuberculosis and other ailments.

Christoph Sutter, deputy head of the ICRC delegation in the Philippines, said in a statement released by the Swiss-based civil rights monitor and aid agency that inmates had suffered due to slow justice and inadequate facilities.

“The ICRC has noticed this problem for many years, and has been talking at the highest level with the authorities about the challenges,” Sutter said.

Detained individuals routinely suffered long trial delays and had to wait for months, if not years, before being sentenced or freed from jails where TB is prevalent, Sutter said.

“We are also dealing with the difficult situation of the infrastructure, which is most of the time old and under pressure from the high rate of overcrowding,” Sutter said.

“It is positive and significant that the president and the administration in general have recognized the seriousness of (the problem),” he added.

Around 99,000 people are detained in the Philippines’ prisons, according to official Bureau of Jail Management and Penology as well as Bureau of Corrections data, including nearly 59,000 whose trials are ongoing.

President Benigno Aquino on Wednesday received a justice department report on the state of the prison system where the problem of overcrowding was acknowledged, Palace Spokesman Edwin Lacierda said.

“The President himself has expressed concern about congestion in our prisons and drugs being introduced into the lives of inmates,” Lacierda said in a statement.

“These factors combine to promote corruption and disorder, and sap… discipline and justice as rules may be unclear or arbitrarily applied to inmates.

“Our correctional system cannot function if it is inhumane, if it is underfunded, and if its rules aren’t further codified and applied in a fair and strict manner.”

Aquino on Monday accepted the resignation of the head of the national penitentiary, which houses some 21,000 convicted prisoners, following allegations wealthy prisoners received special treatment.

The US State Department’s 2010 human rights report said some Philippine jails were filled to four times their capacity and minors were thrown into cells alongside adults.

It said 871 inmates died inside Philippine prisons last year due to TB and other diseases.

“Some prisoners, including women and children, were abused by other prisoners and prison personnel,” the report said.