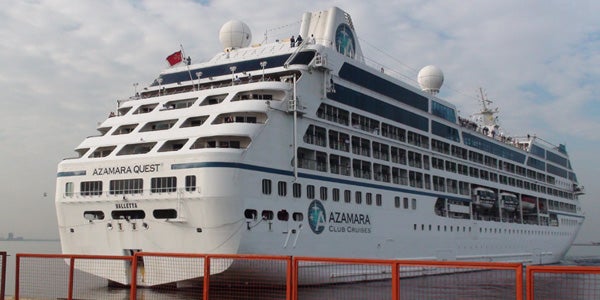 MANILA, Philippines–Five people were  injured when fire hit a luxury cruise ship with about 600 mostly American and European tourists off Philippine waters and has since been adrift, authorities said Saturday.

Vice Admiral Edmund Tan of the Philippine Coast Guard identified one of the injured as Juan Carlos Rivera Escobar, a crew member of the Azamara Quest, although his nationality has not been confirmed.

The fire, whose origin has yet to be determined, disabled two engines of the Azamara Quest late Thursday while it was en route to the Sabah port of Sandakan, Department of Transportation spokesman Nicasio Conti said on radio.

“The fire has been put out but they cannot start the two engines so it is now adrift between Palawan [island] and Zamboanga [port],” Conti added.

In a separate interview, Colonel Jose Cenabre, deputy naval commander for Western Mindanao, said the ship was sailing 45 miles northeast of Mapun Island when the fire broke out.

Cenabre said the Philippine Air Force in Western Mindanao has dispatched a plane to the area and a fishing vessel, which was near the ship’s location was also asked to assist in the evacuation of the passengers and the ship’s 121 crew, mostly Filipinos.

“Rescue is underway,” he said.

Meanwhile, the Philippine Coast Guard dispatched a rescue vessel while the Azamara Quest’s operators, Miami, Florida-based Royal Caribbean International, sent a tugboat to the area in the middle of the Sulu Sea, the spokesman added.

In a travel alert by the Azamara Club Cruises posted in its website (March 30 12noon ET), the fire started on the engine room March 30 8:19 p.m. ship’s time.

The mood onboard was “calm.”

Also, “in an abundance of caution, the Captain deemed it necessary to muster all guests at their assembly stations. The ship is currently running on emergency power until full power can be restored to the engine room,” the statement said.

The Malta-flagged cruise liner is described on its website as a 30,277-ton vessel with 355 crew members and a maximum passenger capacity of 694.

It is currently on a 17-night sailing that departed Hong Kong, China, on Monday, March 26, with port calls to Manila, Philippines; Balikpapan (Borneo), Palapo (Sulawesi), Benoa Bali, Semarang and Komodo, Indonesia and will end in Singapore on Thursday.