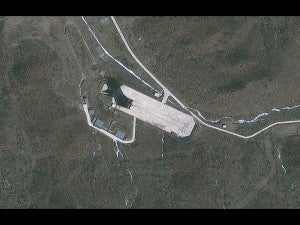 A satellite launch pad in Tongchang-ri, Cholsan County, North Pyongan Province, North Korea, is shown in this satellite image taken and provided by GeoEye taken on March 20. The Tongchang-ri site is about 35 miles (56 kilometers) from the Chinese border city of Dandong, across the Yalu River from North Korea. AP Photo/GeoEye

WASHINGTON—Debris from a rocket launch planned by North Korea next month could cause casualties, a senior US military official said Wednesday.

Acting Assistant Secretary of Defense for Asia-Pacific Security Affairs Peter Lavoy said North Korea has indicated the rocket will be launched southward, but the US lacks confidence about the rocket’s stability and where the impact will be.

He said it is probably intended to land somewhere close to the Philippines or maybe Indonesia. He said South Korea and the Japanese island of Okinawa could also be affected.

“A number of countries are potentially affected,” Lavoy told the House Armed Services Committee. “The debris could fall on their countries; could cause casualties.”

North Korea says the rocket will be launched in mid-April to mark the centennial of the communist nation’s founder and to put an observation satellite into space.

The United States and its allies view the launch as a cover for testing long-range missile technology, and violates a UN ban.

“This is now an issue that not only concerns the South Koreans and, of course, us and the Japanese,” Lavoy said. “Everybody in Asia-Pacific has become concerned about North Korea’s growing missile capability, especially as they’re continuing to develop their nuclear weapons capability.”

In 1998, North Korea tested a long-range missile that hurtled east over Japan. Experts say a new launch site in North Korea’s west allows a flight path that could avoid flying over other countries.

North Korea also conducted long-range rocket tests in 2006 and 2009, and the latest test could demonstrate if it is closer to perfecting a multi-stage rocket that could hit the United States. North Korea has also conducted two nuclear tests, but is not believed to have mastered how to fit a nuclear weapon onto a missile.

Gen. James D. Thurman, the commander of the 28,500 US forces in South Korea, said that “left unchecked” the development of North Korea’s missile capability would pose a serious threat to the US but he declined to specify at an open hearing how long that might take.

North Korea announced the planned launch just two weeks after reaching an accord with the US to receive food aid in exchange for freezing nuclear activities and long-range missile tests. The agreement had offered hope for an easing of tension between the long-term adversaries and a resumption of disarmament talks on the North’s nuclear program.

Lavoy confirmed that plans to provide food were now suspended because the US lacked confidence that North Korea would stick to its commitments to allow proper monitoring of the aid’s distribution.

He viewed the planned launch as an attempt to demonstrate the “bona fides” of impoverished North Korea’s new government, under Kim Jong Un, who took power after the death of his father and long-time ruler Kim Jong Il.

“They can’t meet the needs of the population,” Lavoy said, “so they resort to provocative behavior.”

Thurman said in his testimony that the situation on the Korean Peninsula has entered a “dangerously uncertain period.”

He detailed North Korea’s capability of hitting the South Korean capital Seoul with artillery and missiles loaded with high explosives and chemical munitions with little or no warning. He also spoke of its growing cyber-warfare capabilities against US and South Korea interests, increasingly used against military, governmental, educational and commercial institutions.

But he also remarked on atrophying in some of impoverished North Korea’s forces — it maintains the world’s fourth largest army — and said the US could repel any North Korean attack.

On diplomatic efforts to get North Korea to reconsider the launch, Lavoy said the US was dissatisfied with China’s attempts so far to pressure its North Korean ally to reform and abide by norms of international conduct, and urged it to do more.

“We hope that China will take a more constructive approach,” he said.

North Korea has vowed to go forward with the launch. It says the satellite it sends into space will estimate crop production and analyze natural resources.