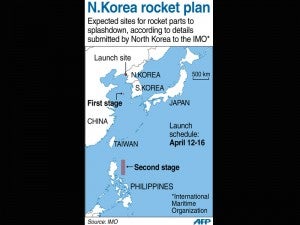 SYDNEY—Australia and the Philippines on Wednesday joined a growing list of nations to condemn a North Korean plan to launch a long-range rocket next month, urging Pyongyang to abandon the move.

The North has said it intends to launch the rocket to put a satellite in orbit sometime between April 12 and 16, in a move the United States and other nations say is a pretext for a missile test.

Australian Foreign Minister Bob Carr said the launch would be a clear breach of United Nations Security Council resolutions and undermines pledges North Korea made in recent talks with the US.

“North Korea’s nuclear and long-range missile programs present a real and credible threat to the security of the region, and to Australia,” he said.

“As recently as three weeks ago, North Korea agreed in talks with the United States to implement a moratorium on long-range missile launches.

“I call on North Korea to follow through on this recent assurance and its previous commitments and abandon its launch plan.”

A UN Security Council resolution passed after the North’s missile and nuclear tests in 2009 bans a ballistic missile launch for any purpose.

Washington also says a launch would breach a bilateral deal announced on February 29, which offered 240,000 tons of US food aid in return for a partial nuclear freeze and a suspension of missile tests.

The Philippines said the threatened launch was “unacceptable” and urged Pyongyang to call of the launch and to comply with UN resolutions.

“We express grave concern over (North Korea’s) announced plan to launch a satellite between April 12 and 16 which we find unacceptable,” the Department of Foreign Affairs said in a statement.

The Philippines is a longtime ally of the United States and South Korea, having sent troops to fight under the United Nations flag to defend the South from a North Korean invasion during the 1950-1953 war.

The Philippines established diplomatic relations with North Korea in 2000, one of the last Asian countries to do so.

Leaders of five nations will discuss ways to press Pyongyang to scrap the rocket launch when they meet next week at a Seoul summit, South Korean president Lee Myung-Bak said in interviews published Wednesday.

US President Barack Obama will attend the nuclear security summit, along with leaders of China, South Korea, Japan and Russia. All the countries have been involved since 2003 in talks to shut down the North’s nuclear program.