Aquino flies to Cambodia April 3-4; US, UK in May 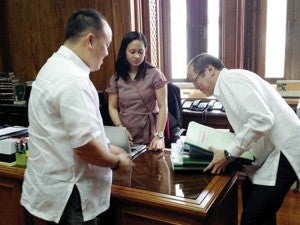 WORKING FOR THE BOSS Amid the amusing “Noynoying” antics by militant students, President Aquino is shown in this Malacañang photo scooping up a stack of documents in his office before setting out to attend a series of meetings at the Palace on Tuesday. Malacañang Photo Bureau

MANILA, Philippines—It may be the holiest period in Christendom but for President Aquino, Holy Week will just be an ordinary working week.

On April 3 and 4—Holy Tuesday and Holy Wednesday—he will be in Phnom Penh, Cambodia, to attend the 20th summit of the Association of Southeast Asian Nations (Asean).

Upon his return home, Mr. Aquino will not hie off to Baguio City, as his predecessor was wont to do during Holy Week, but stay in Manila to monitor the expected mad dash of people out of the capital to take advantage of the long weekend.

“We will monitor airports, bus terminals and seaports,” Mr. Aquino told reporters yesterday when asked about his Holy Week plans.

He will even watch the vagaries of the weather.

“In Pagasa (Philippine Atmospheric, Geophysical and Astronomical Services Administration), will there be rain?” he asked, listing down the things he would monitor during the Holy Week.

The visit to Cambodia will be the President’s first foreign trip this year.

Mr. Aquino said he would return to Cambodia at the end of the year for the Asean leaders’ meeting and the Asean summit.

The President said he also planned to visit the United States, probably in May or June, depending on the dates finally agreed on.

That journey will include a side trip to the United Kingdom, where he said he would have a meeting on a “substantial investment in energy.”

Mr. Aquino said he would also go to Australia and New Zealand but was not sure at this time “if this would be a state visit.”

That is not all that’s on his calendar.

In September, he said, he will fly to Vladivostok, a seaport city in the Russian Far East, to attend a summit of the Asia-Pacific Economic Cooperation (Apec) forum.

Asked whether he would accept the invitation of the Catholic Bishops’ Conference of the Philippines to attend the canonization of Blessed Pedro Calungsod in Rome on Oct. 21, Mr. Aquino said: “It depends. October is our budget season.” He was referring to budget deliberations between the Palace and lawmakers.

Mr. Aquino said that if he decides to go to Rome, he would be obliged to visit nearby countries that had also invited him to make a visit. The European nations that have invited him include Spain, Belgium, France and Germany.

But he said that before going to Belgium and Germany, the government needed to iron out problems involving contracts with them.

“It has to be a … very pleasant visit for all of the parties concerned,” Mr. Aquino said.