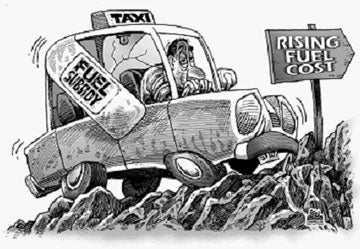 The national government’s reduction of the fuel subsidy intended for public utility vehicle (PUV) drivers across the country by about P50 million is a tacit admission that it can’t sustain the program beyond a month.

The fuel subsidy program was the national government’s Band-Aid response to spiraling fuel price increases triggered by the Libya crisis and Japan’s earthquake-tsunami-nuclear troubles that show no signs of relief at least for the next two months.

The global mother oil cartel of the Organization of Petroleum Exporting Countries (Opec), some members of which openly advocated the use of military force against Libyan strongman Moammar Qadaffi’s brutal regime, responded with a promise to double oil production in succeeding weeks, the usual response to any uptick in the volatile Middle East region.

That promise usually triggers greedy oil firms like the Philippines’ Big Three to raise fuel prices for the hapless motorist and the equally, if more so, challenged PUV operators.

The Aquino administration’s knee-jerk response is to set up a fuel subsidy program priced at slightly over P400 million, which is good for at least three weeks.

At best, the program lives up to its moniker as a pantawid or bridge/extender to cushion the effects of the oil price hikes.

The fuel subsidy program has eerie echoes of a similar doleout program financed by Aquino’s predecessor, which is being continued by his administration with a bigger budget and more flak from the opposition.

It would be interesting to see how this fuel subsidy program plays out in Cebu, which has the highest fuel prices across the country.

Transport operators here share the same cynicism as their counterparts in Luzon and Mindanao.

After the program, the drivers and operators will have to fend for themselves. They also have their pending fare hike petitions at the Land Transportation Franchising and Regulatory Board to follow up.

The fuel subsidy program will take effect next week and so might as well appeal for coordination between the national government and local government units (LGUs).

Though temporary, the operators and drivers need some subsidy to tide their costs.

We can only hope that transport operators police their ranks and use the subsidy to shore up their business and not make a profit out of the program.

If they do so, they’re no worse than the oil firms who bleed cash out of the pockets of consumers despite their already-obscene profits.

Nancy Binay: Battle not yet over, but government has already quit