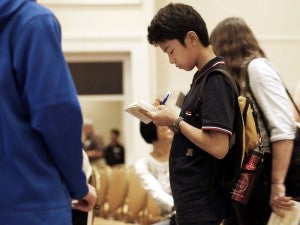 Yuichi Yoshioka, 12, from Tokyo, Japan, exchanges autographs with other spelling bee participants after the written first round test of the 2011 Scripps National Spelling Bee, Tuesday at the Gaylord National Resort and Convention Center in National Harbor, Md. AP

NATIONAL HARBOR, Maryland—The spelling contest in Tokyo that sends a representative to the Scripps National Spelling Bee was scheduled for March 12, a day after the devastating earthquake.

The accompanying tsunami created a national crisis that understandably put spelling on hold. The bee was postponed twice before it was finally held May 14. The winner was Yuichi Yoshioka, a Filipino-Japanese whose family then had to make quick preparations to fly to the United States.

“I was quite prepared on March 11, and then the earthquake struck,” said Yuichi, a 12-year-old seventh grader at the Global Indian International School in Tokyo. “And after that the whole month of April I started to relax a little bit because I thought ‘Oh, maybe there won’t be a spelling bee.’ That was a big mistake. I had to study double-time from late April, and somehow I managed to win with a word I didn’t know.”

Yuichi gets his spelling prowess from his Filipino mother, who excelled in English spelling bees while growing up in the Philippines.

Yuichi’s family, like most of the country, is dealing with the emotional trauma of a national catastrophe. His aunt lived near the now-crippled nuclear power plant and has relocated to a hotel in Tokyo. Aftershocks made studying an adventure.

“My son is studying for the spelling, and when we see the lights starting to shake, we stop for a while,” said his mother, Ellen Yoshioka. “We don’t know what will happen.”

He’s been bilingual essentially since he started talking and began attending an international school at age 5. He is one of 29 spellers among the 275 who don’t speak English as a first language.

“I don’t even think I speak English,” he said modestly.

But he can spell it.