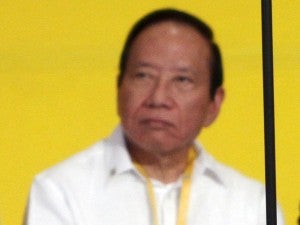 For the third time, the Commission on Appointments (CA) deferred the confirmation of Domingo Lee as Philippine ambassador to China for his failure to answer questions about the Spratlys dispute.

Senator Sergio Osmeña III specifically asked Lee on Wednesday about three subarticles of the United Nations Convention on the Law of the Sea (Unclos) that China said it did not agree with.

China and the Philippines are among the claimants of all or part of the chain of islands in the West Philippine Sea (South China Sea) believed to be rich in oil deposits.

“They (Chinese representatives) made exceptions when China signed the Unclos. They said ‘we ratify but we do not agree with the following,’” Osmeña noted.

Just before this, Lee said China was among the 168 countries that were signatories to the Unclos.

“There is the wording, ‘proximity,’ they don’t agree with that,” Lee told Osmeña.

“What were those articles?” the senator asked.

“That’s not included in those … articles … rule of the law of the sea. Concerning the water,” Lee replied.

Criticism had been heaped on Malacañang’s decision to appoint Lee as ambassador to China. One reason that has become evident during his appearances in the CA hearings is his inability to express himself in English.

Lee dismissed this issue at his second confirmation hearing in late 2011.

He said then that his proficiency in Chinese would be a greater advantage and that he had even acted as unofficial translator for then President Joseph Estrada when he visited China.

Lee also boasted in a book that he was “the godson of Benigno Aquino Sr.” who is the paternal grandfather and namesake of the President.

“Mr. Ambassador, you are guessing. This is the Unclos,” Osmeña said. He then showed Lee a copy of the voluminous agreement, about two inches thick.

The senator told Lee that those responsible for the agreement “met three times before they finalized this convention. China acceded to the convention much later (in) 1994. But they did have an exception. They said ‘we agree but as to articles number so-and-so- 1a, 1b, 1c…”

“Are you familiar with those sections? Tell me the articles they do not agree to,” Osmeña challenged.

“I have to start from the beginning,” Lee answered.

“Better do your homework again. That was the only action China would agree to,” the senator shot back.

“Because they have their own interpretation…” Lee trailed off.

“I don’t care what their reason was. They said ‘we take exception to so and so, subsections 1, 2, 3 of that particular article. What was that?” Osmeña asked again.

“It’s already ratified and then they find out this such word is not supposed to be applied for,” he added. Osmeña smiled but shook his head in disdain.

“Not acceptable to them because of interpretation of nearby island,” Lee concluded.

“The exception was very specific. They want to amend a subsection and I want to know if you know that. Obviously you don’t,” Osmeña observed.

“I will take note of that,” Lee replied.

At one point, Camarines Sur Representative Luis Villafuerte raised his hand and complained that he could not understand Lee’s answers in English.

“Which language are you more comfortable with? Would you prefer to answer in Chinese so you’d gain an advantage over (Osmeña),” he asked, causing laughter in the Senate function room where the confirmation hearing was being held.

“Actually, I have no problem with that,” Lee said in English and Filipino.

“In term of English, it’s different not in Tagalog. But I do not look at a piece of paper to be prompted like what (Osmeña) does. It’s all in my mind (lahat nasa ulo ko),” he added.

“But how do we understand?” Villafuerte asked.

“I would also not be able to explain it in Tagalog. It’s technical,” the ambassador replied.

“So, if I still would not understand you, I would not ask any more questions,” the congressman said with resignation.

At one point, Osmeña shifted the conversation to the Spratlys issue, particularly on the solution being proposed by the Philippines to solve the dispute among the claimants.

“When was this issue last discussed among the foreign ministers of (the Association of Southeast Asian Nations)?  Where was it held,” the senator asked.

“Vietnam? Or Malaysia? I don’t want to guess,” Lee said.

He added that he did not attend the meeting since “I am not considered official ambassador yet.”

Osmeña asked other officials of the Department of Foreign Affairs (DFA) to join them at the table. The department officials said most of the details about the Spratlys would better be discussed in executive session.

Senator Panfilo Lacson pointed out that the Senate national defense committee that he chairs also held an executive session with the DFA about the Spratlys issue.

“It is strictly confidential,” he said, in defense of the DFA’s request.