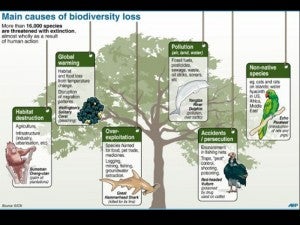 MANILA, Philippines—Years of unmitigated and destructive human activities have plunged the Philippines in a biodiversity “crisis” that could take decades to reverse, environment officials said Tuesday.

Undersecretary Demetrio Ignacio of the Department of Environment and Natural Resources said the Philippines is one of the world’s most biodiverse places, but its marine and wildlife riches are under threat because of intrusive man-made activities.

“The Philippines is one of the most threatened in the world. The rate of extinction of species is 1,000 times the natural rate because of manmade activities,” he told the Association of Southeast Asian Nations (Asean) Champions of Biodiversity awards. “It is a crisis. We are the hottest of the hot spots.”

Rodrigo Fuentes, executive director of the Asean Center for Biodiversity, said the region where the Philippines is located is in danger of biodiversity loss.

He described it as a “silent” crisis. “You don’t see it, but you feel it. We are in the midst of it.”

“Habitat loss, unsustainable use of resources, climate change, invasive alien species and pollution have not been arrested and continue to negatively impact biodiversity,” Fuentes said in a statement.

These threats contributed to the decline in the mangrove, coral reef, seagrass, forest, agro, peatland and freshwater ecosystems, he noted.

Officials said it would be difficult to reverse the trend because it often takes years to get ecosystems back in balance. Moreover, people and governments only realize the loss of species and ecosystems when the crisis is there, making recovery harder and more expensive, Fuentes said.

Ignacio said the Philippines’ main problem is the loss of habitats due to deforestation and coastal denigration.

He cited as an example the recent discovery of black coral poaching in the seas of Mindanao, a part of the Coral Triangle where one of the world’s richest marine resources could be found.

Coral reefs are considered to be “rainforests of the seas,” providing food, nutrients, and protection to many marine species. The loss of one species could have a domino effect on other creatures that depend directly and indirectly on it, the officials said.

In the Philippines, deforestation is caused by unmitigated logging and urbanization. According to DENR, the Philippines has 8 million hectares of denuded and idle forest lands. A recent study by Conservation International said only about four percent of the Philippines’ forests remain as natural habitat for many endemic species.

The CI also noted that forest lands are being cleared to make way for food production and other activities to meet the needs of the country’s rising population, now around 90 million.

According to the DENR, the country loses about 2 percent of its forests every year. The Philippine government is seeking to reverse the trend by planting 1.5 billion trees in six years.

Poor coastal management and unregulated fishing have contributed to the decline of water resources and coastal areas, the environmentalists said.

The World Wide Fund for Nature recently said the Philippines used to have over 27,000 square kilometers of healthy coral reefs. However, 50 years of destructive commercial and unregulated fishing have left less than 5 percent in excellent condition, with just 1 percent in pristine state.

Ignacio said the DENR could not quantify the country’s biodiversity loss, noting that there had been no assessment of it. “It takes a huge amount of resources,” he said.

Protected Areas and Wildlife Bureau Director Theresa Mundita Lim said the destruction of Philippine coral reefs for the rare and valuable black corals appeared to be wider than initially reported. It could be five times the size of Manila, she said.

Lim noted that it would take years for the reefs to recover their original health as corals are “slow growing” creatures. Black corals, for instance, grow only 2 millimeters a year. It could take “50-100 years” for the black corals to grow to their adult size, Lim said.

The waters off Mindanao are not the only part of the country that are under threat from marine poachers. The entire Philippine coasts and seas are their harvest grounds, Lim said.

Turtles, which are critically endangered, and sharks have been poached and sold illegally for their meat and fins in China and Taiwan where demand is high, she said.

The Philippines has 36,289 kilometers of coastline and is considered to be the world’s second-largest archipelago. Environment officials said they do not have enough manpower and resources to guard the country’s coastline and seas.