2 church bells taken by Americans turned over to National Museum 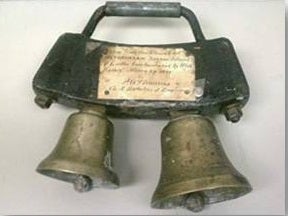 MANILA, Philippines—Foreign Affairs Secretary Albert Del Rosario on Friday turned over to the National Museum a Philippine-American war artifact consisting of two church bells, reportedly taken by American troops from a church in Meycauayan, Bulacan in 1899.

The two bells are connected by a hard block of dark wood with a handle on top.

An inscription attached to the wooden block of the bells reads: “Taken from the Church at MEYCAUAYAN, Luczon (sic) Islands after bombardment by Utah Battery March 29, 1899. By P.O. Thomas, Co. A Batallion of Engineers.”

The artifact is approximately 10 inches long on each side and about 3.5 inches wide. It is estimated to weigh five pounds.

The church bells were said to have been taken by American soldiers from a church in Meycauayan, Bulacan, at the height of the war between Filipino guerillas and the occupying American forces.

It was not known who gave the bells to the said convent, but Kniffen said that perhaps a small museum or a family could have turned it over to the convent after noting that they were church bells, the DFA added.

In a previous interview, Del Rosario, a former Philippine envoy to Washington, called the bells “priceless pieces of our heritage.”

“Their return at this point of our history is a demonstration of the commitment of both the US and the Philippines to further solidify our close relations for the mutual benefit of our people,” Del Rosario said.