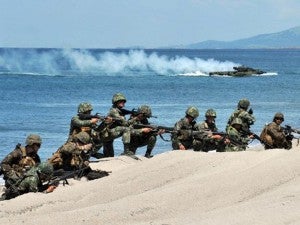 US and Philippine Marines simulate an amphibious landing as part of RP-US Amphibious Landing Exercise on a beach in San Antonio, Zambales in October 2011. AFP

MANILA, Philippines—Approximately 6,000 troops from the United States are expected to arrive in the country for the 28th Balikatan exercises between the Armed Forces of the Philippines (AFP) and the US this coming April 16-27, Balikatan spokesman Major Emmanuel Garcia said Wednesday.

“This year’s Balikatan Exercises is the 28th of its series that calls for a more responsive partnership with the community focusing on Humanitarian Assistance and Disaster Response (HA/DR) Training,” the AFP said in a statement.

They will participate in a Command Post Exercise with the National Disaster Risk Reduction and Management Council (NDRRMC), Office of Civil Defense (OCD), Metro Manila Disaster Coordinating Council (MMDCC), AFP, and the Philippine Red Cross (PRC) to test the Humanitarian Assistance and Disaster Response plans they have laid out.

“The exercise is designed to enhance the AFP and US Armed Forces interoperability in the conduct of not only on traditional military training but also on non-traditional aspects that reach out [to] communities in need of urgent assistance,” the AFP said in a statement.

As part of the exercises, both the US and Philippine troops will participate in Humanitarian and Civic Assistance projects in Palawan where they will build classrooms in five barangays (villages) and conduct multiple medical, dental and veterinary civic action projects.

Both the US and Philippine military will also conduct “cross-training and field training exercises in mainland Luzon and Palawan province … to improve the interoperability of the AFP and US military,” the statement said.

AFP Chief of Staff Lieutenant General Jessie Dellosa said in the statement that the relations between the US armed forces and the AFP are “healthy and vibrant.”

“The cooperation between the two Armed Forces manifests the unswerving dedication and commitment of our security forces towards a more stable and secure Asia-Pacific region. We are looking forward to a successful and fruitful Balikatan 2012 which will help our troops to perform better and further improve their capabilities,” Dellosa said.