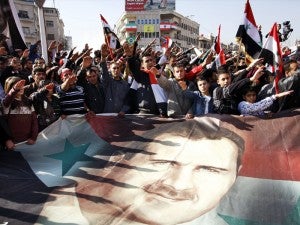 Fearing reprisals against Filipino workers, the Philippine government abstained from voting on a United Nations (UN) Human Rights Council resolution deploring the “brutal actions of the Syrian regime” and reiterating the need to urgently address humanitarian needs, according to the Department of Foreign Affairs (DFA).

“Our primary concern right now is the welfare of our people,” DFA spokesperson Raul Hernandez said a text message to the Philippine Daily Inquirer, adding that “for this reason, the Philippines was unable to support the resolution.”

Hernandez added: “We are repatriating our people and we have asked the Syrian government to help. We are working together to accomplish this.”

The UN resolution called on the Syrian government to immediately put an end to all human rights violations and attacks against civilians and to stop all violence.

It also urged the Syrian government to allow free and unimpeded access by the UN and humanitarian agencies to carry out a full assessment of needs in the city of Homs, which has been under severe attack for over a month, and other areas, and to permit humanitarian agencies to deliver vital relief goods and services to all civilians affected by the violence.

Members of the UN’s top human rights body approved the resolution proposed by Turkey with 37 votes in favor and three—Russia, China and Cuba—voting against.

Three members of the 47-nation body—Ecuador, India and the Philippines—abstained, while four others didn’t vote.

Last month, the Philippines also did not participate in a UN General Assembly vote seeking endorsement of an Arab League proposal for Syrian President Bashar al-Assad to step down, apparently for the same reason.

Supporters of the UN resolution were hoping for an overwhelming “yes” vote to deliver a strong message to Assad that he must immediately stop the crackdown on protesters and step down. The crackdown has killed more than 7,500 people.

To date, more than a thousand overseas Filipino workers in Syria have already been repatriated to the Philippines since the beginning of the unrest.

A rapid response team, composed of the DFA, Department of Labor and Employment and Philippine National Police personnel, remains in Syria and continues to help in the repatriation of OFWs in conflict areas.

Crisis alert level 4 is currently in place over Syria and the mandatory evacuation of all Filipinos in the country is underway.

Earlier, the DFA requested the next-of-kin of Filipinos in Syria to assist the DFA and help ensure the safety of their family members by providing the whereabouts of their relatives and their up to date contact information.