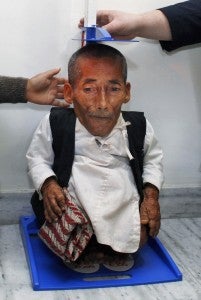 KATHMANDU—A 72-year-old man from a remote valley in southwestern Nepal was on Sunday declared the shortest man ever documented after being measured by Guinness World Records officials.

“I’m continually amazed that this record keeps getting broken,” Guinness World Records editor-in-chief Craig Glenday said in a statement after the adjudication in the Nepali capital Kathmandu.

“Just when you think it’s impossible for the record to get any smaller, Mr. Dangi comes along and astonishes us all.

“What I find equally remarkable is his age – if he really is 72, he is by far the oldest person to be awarded the shortest-man record in Guinness World Record’s 57-year history,” Glenday added.

Dangi has also been declared the shortest human adult ever documented, taking the accolade from India’s Gul Mohammed, who was measured at 57 cm before he died in 1997 aged 40.

Dangi, who weighs 12 kilograms (26.5 pounds), was brought to the attention of the world only three weeks ago after Nepali researchers looking into the history of the Dangi people were introduced to him.

He told AFP in his first interview with Western media earlier this month that recognition at the end of his life would be some compensation for years of hardship.

The pensioner, who was orphaned at 12, says relatives used to display him at freak shows to make money for themselves and that he has never experienced romance or found his soulmate.

“Until now, Chandra’s stature has been a burden; he is acutely aware of the difficulties of fitting into an average-sized world and is disappointed at having missed out on the chance to find a wife,” Guinness World Records said on Sunday.

“He is hopeful, though, that his new title will see a change in his fortunes.”

The cause of his stunted growth remains a mystery although many holders of the “world’s shortest man” crown have suffered from primordial dwarfism.

Dangi earns a sparse living weaving jute headbands and has only ever left his village in poverty-stricken Dang district, 350 kilometers (220 miles) from Kathmandu, a handful of times.

Guinness World Records quoted Dangi, who visited Kathmandu for the first time to be measured, as saying he was too old for marriage but would still like to travel.

“I want to visit foreign countries and meet people from around the world,” Dangi said.

Another Nepali, Khagendra Thapa Magar, claimed the title in 2010 after being measured at 67 cm.

Magar’s stint as the world’s shortest man saw him travel to more than a dozen countries and make television appearances in Europe and the United States.

He was also the official face of Nepal’s tourism campaign, which featured him as the smallest man in a country that is home to the world’s highest peak, Mount Everest.