Another 36 OFWs from Syria to return to Philippines–DFA

MANILA, Philippines — Another 36 Filipino workers (OFWs) from Syria are scheduled to return to the country this Sunday, bringing to 1,009 the total number of OFWs to have availed of the government’s mandatory evacuation program, according to the Department of Foreign Affairs.

The latest batch of repatriates brought to 1,009 the total number of OFWs to be evacuated by the DFA from the strife-torn Middle East country. 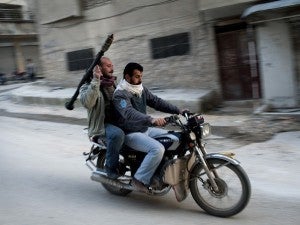 RIDING IN TANDEM. Supporters of the Free Syrian Army ride a motorcycle with a rocket-propelled grenade in Kafar Taharim, Syria, Friday, Feb. 24., 2012. AP

In a statement, the DFA said 20 of the repatriates were on board Emirates Airlines flight EK 332, which is expected to arrive at 4:20 p.m. at Terminal 1 of the Ninoy Aquino International Airport (NAIA).

They will be accompanied by Charge d’Affaires Olivia Palala of the Philippine Embassy in Damascus, the Syrian capital.

The remaining 16 repatriates are taking Emirates Airlines flight EK 334, scheduled to arrive shortly before midnight at the same NAIA terminal.

Raul Hernandez, the DFA spokesperson, said “at least nine of the OFWs came from the Syrian protest hubs of Homs, Hama and Idli while nine others, all overstaying OFWs, have just been released from the Kaffarseuseh prison in Damascus,” the Syrian capital.

Early this month, Foreign Secretary Albert del Rosario deployed the DFA’s “rapid response team,” which also grouped personnel from the Philippine National Police and the Department of Labor and Employment, to “help out in the extraction and repatriation of OFWs in Syria’s conflict areas.”

Hernandez said the foreign office was set to evacuate more than 160 OFWs based in the conflict areas, where “violence has become very alarming.”

The embassy has so far received “a total of 278 repatriation applicants from the four conflict areas and 222 of these were from Homs,” he noted.

The mission, he added, was “working on the instruction of Secretary Del Rosario to fully and effectively implement Crisis Alert Level 4 (mandatory or forced repatriation) due to the security situation in Syria.”

The DFA chief told the Philippine Daily Inquirer “based on new developments in Homs, we may need to go one step further and resort to a strategy of extraction.”

“So rather than reduce the operating teams to help our distressed nationals, we are expanding to do what is necessary…From our recent official visit to Damascus, we had anticipated a probable escalation of violence which resulted in our bringing in an additional team of negotiators to focus on mandatory repatriation,” he said.

Del Rosario also said that unlike the United States embassy in Damascus, the Philippine mission would remain open “as long as we have OFWs there that need help.”

“We have no plans of closing…Our embassy will continue to operate as mandated by President [Benigno] Aquino [III],” he added.

Majority of the remaining 9,000 OFWs in Syria have ignored the government’s offer, prompting the DFA to intensify its efforts to reach out to them and convince them to leave the country.

No Filipinos were killed or injured in the latest and deadliest crackdown on protests by Syrian security forces, said the embassy.

More than 5,500 people have died in the 11-month uprising in Syria, according to the United Nations.