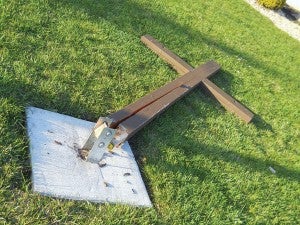 UNION CITY, East Bay, California—As the Lenten season sets in with the observance of Ash Wednesday, parishioners of Saint Anne Catholic Church on Cabello and Dyer Sts. in this city woke up February 22 to the gruesome sight of their parish grounds vandalized and desecrated to the hilt in what Union City Police classified as a hate crime.

The perpetrators, who remain at large at press time, left in their wake macabre evidences of the rage and hatred that apparently consumed them:  a wooden cross broken off its footing; a monument to the Seven Beatitudes knocked over from its base; faces of the icons of St. Joseph and the Virgin Mary sprayed over with black paint; and a spray-painted pentagram in two different locations, each with the Latin words, ‘carpe noctem’ (“seize the night”) on top, and ‘Satan’ at the bottom.

“I was disturbed. I was afraid. I was sad. I was afraid this may happen again,” Saint Anne’s Filipino pastor, Rev. Fr. Geoffrey Baraan, said to FilAm Star of his reaction when he first saw the destruction. “The parishioners were emotional. Many shed tears.”

Yet instead of setting himself and the parish staff to a clean-up task immediately, Fr. Geoffrey decided to leave the horrific scene as it was the whole day.  “I want people to see what hatred can do,” he explained, adding that the parish would start the repair and restoration work the following day, Thursday.

In his homily during the Ash Wednesday mass, Fr. Geoffrey urged his parishioners not to harbor anger in their hearts as a result.  Instead, he told them “to forgive and love our enemies, because that’s what God wants us to do.”

Church facility committee member Peter Petit was the first to discover the destructive handiwork.  When he noticed that the wooden cross was on the ground, he first thought the strong winds may be to blame

“But windstorms have come and gone before without ever toppling the cross,” Petit told FilAm Star.  “So I decided to look around and saw the beatitudes memorial knocked over, too.”

Petit said that while he walked around with Fr. Geoffrey to inspect the entire church grounds, he was feeling sad and hurt that a person or group of persons would be capable of inflicting moral anguish on a place that many Union City residents have come to love as their second home. 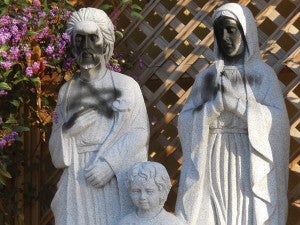 Long-time church neighbors, Carolyn Ballesteros and daughter Elisa, never suspected something had gone awry until they saw the vandalism when the mother came home from work.  “The night before, I even picked up my kids from the church after their catechism session and all seemed normal,” Carolyn said.

Mexican-Hawaiian parishioner Andre Gloria, who is married to a Filipina, said, “My first reaction was one of fury, because I thought no one would do this to a peace-loving community.  But times have really changed.”

According to Fr. Geoffrey, the police told him they did not believe it was just a random act of mischief, because the vandals were very specific on what they wanted done.  Interestingly enough, the perpetrators left the icon of the boy Jesus Christ in the Holy Family statue untouched.

“From all indications, according to the police, this is a hate crime.  All the symbolisms of the Catholic faith were defaced or destroyed, except the statue of the boy Jesus,” he told FilAm Star.

He also said neither he nor any staff member or parishioner had received any threat nor warning that something like this would happen.

In any case, Fr. Geoffrey acknowledged the need to install a few closed-circuit television cameras around the church grounds as a hedge against untoward incidents in the future.

“The good part that came out of this is that people from all walks of life, people from all communities and faiths around our area have been coming here to offer their support, love and prayers,” Fr. Geoffrey said. “I am sure we will all learn from this experience and discover something positive …. something powerful, meaningful and transforming.”

Read Next
Filipino WWII vets get support from US lawmaker
EDITORS' PICK
IATF to LGUs: Issue ordinances vs attacks on frontliners, COVID-19 patients
Nograles: Cabinet members to donate 75% of monthly salary to aid COVID-19 fight
Diokno to Duterte: OK to make fun of buck tooth, but focus on people’s needs first
10 Filipinos positive for COVID-19 in UK, 7 in Ireland — envoy
Quick chat with Nicole Andersson: ‘You really don’t need much to be happy’
Robredo spox thanks Duterte for defending VP’s efforts vs COVID-19
MOST READ
Gov’t mulling quarantine period extension of 15-20 more days
Sotto on Isko Moreno’s call: We do our job without the media following our every move
Cook more and eat less: Tips on your quarantine diet
ADB warns PH against prolonged lockdown
Don't miss out on the latest news and information.