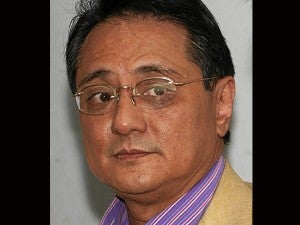 Aleli Arroyo is not the legal wife of the late Negros Oriental Representative Ignacio “Iggy” Arroyo whose body is scheduled to arrive on Friday evening from London, following an agreement between three parties claiming custody of the body, according to lawyer Leonard de Vera.

De Vera, Grace Ibuna’s counsel, said the marriage of Aleli and Iggy was null and void due to a technicality.

“The annulment of the marriage of Iggy to [first wife] Marilyn Jacinto was valid, but the subsequent marriage was not because the annulment was not reported to the local registry office and the court had not issued a certificate of finality,” De Vera said.

He said the annulment was filed in a court in Pampanga province, where Iggy and his first wife were married.

But Aleli said that she felt good about the arrangement on the wake and interment based on the agreement drawn by her lawyers, Ibuna and Arroyo’s daughter by his first wife, Bernardina Arroyo-Tantoco.

“I am happy. I feel very good,” a smiling Aleli described how she felt about the arrangement reached by the parties on Tuesday evening.

She said her daughter with the lawmaker, Alelou, 14, prayed with her on the quick return of her husband’s remains. “This is answered prayers,” Aleli said.

De Vera cited Articles 51, 52 and 53 of the Family Code, which say that all cases of nullity of marriage should be reported to the proper government agency, the local registry office.

The lawmaker died in London on January 26 due to a liver ailment, with partner Grace Ibuna at his sickbed.

But Aleli, who said she was happy that her husband’s body was finally coming home, maintained that she was the legal wife.

“The best evidence of my being the legal wife is our marriage certificate,” Aleli told the Philippine Daily Inquirer when asked to comment on De Vera’s contention that the Quezon City Regional Trial Court Branch 92 should not grant her an injunction against Ibuna because her marriage to Arroyo was not valid.

She also said that she had received a letter of sympathy from former President and now Pampanga Representative Gloria Macapagal-Arroyo, who is detained in a government hospital on charges of electoral sabotage. The former President was reportedly close to her late brother in-law.

“It was a letter advising me to remember the good memories,” said Aleli, who disclosed that she would write the former President to express her gratitude.

Details of the agreement on the wake and burial were disclosed in open court after a closed-door session with Judge Eleuterio Bathan, who was hearing the petition of Aleli against Ibuna and Tantoco.

Due to the out-of-court agreement, Bathan said at Wednesday’s hearing that he would wait for the signed documents of the deal, which were supposed to be submitted today by Aleli’s lawyers, before ordering the dismissal of the petition of injunction.

Aleli earlier asked the court for a temporary restraining order and injunction to stop Bianca Arroyo, the lawmaker’s daughter with his former wife, Marilyn Jacinto, and Ibuna from claiming her husband’s body.

Tantoco said she was happy that her father’s remains were finally coming home as a result of the agreement.

“I am relieved and glad and my father will be finally laid to rest peacefully,” Tantoco told the Inquirer after Wednesday’s proceedings.

Gerald Anderson amid Julia Barretto pregnancy rumor: ‘Congratulations to me’