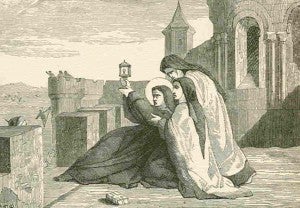 MANILA, Philippines—Devotees have until April to view and venerate the relic of St. Clare of Assisi, which arrived from Rome Tuesday morning.

The relic of the Italian saint will be taken to different key cities, dioceses, and monasteries across the country, according to June Keithley, head of the Center for Peace Asia, which organized the pilgrim relic’s sojourn in the country.

The relic, a bone from St. Clare’s cranium, will be flown to Cebu Wednesday before going to Davao, Manila and other provinces.

“This would be the relic’s first tour in Asia out of Italy,” Keithley said, adding that the relic will stay in the country for two months. “This is also part of the year-round 800th year celebration of the founding of the Order of St. Clare,” she said.

Keithley said the tour is meant to spread devotion to St. Clare.

“We also want people to experience healing through an encounter with her relic,” she said, adding that the renowned relic has manifested a number of miracles.

Kiethley hopes that the pilgrim relic would enable people to get to know St. Clare or renew their desire to know her deeper.

“The pilgrimage is a way of reaching out to as many people as possible,” she said.

St. Clare founded the Order of Poor Ladies, a monastic religious order for women in the Franciscan tradition.

In the life of St. Clare, many miracles were said to have been documented, one of which was the defense of the Italian city of Assisi from marauders.

Placing the Blessed Sacrament at the enemies’ direction, Clare simply prayed as she entrusted herself and her people to God’s protection, and the enemies fled.

In 1958, Pope Pius XII designated Clare as patron saint of television on the basis that when she was too ill to attend Mass, she reportedly was able to see and hear the service on the wall of her room.